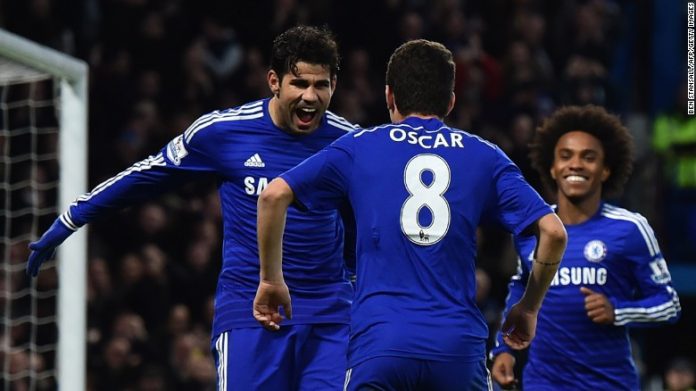 Chelsea superstars Oscar and Diego Costa were reportedly involved in a training ground altercations at the club’s training ground at Cobham, as the duo had to be separated for making rash tackles at each other.

The Guardian’s David Hytner claims that Costa had gone in hard with a tackle on Oscar, and the Brazilian midfielder replied in kind with a hefty tackle, resulting in a training ground bust-up.

It was a highly intense session, as the Chelsea squad prepared for Sunday’s FA Cup third cup tie to Scunthorpe United, and as per the report, “it looked as though Costa and Oscar were ready to trade punches.” Chelsea team-mates jumped in quickly to stop things from escalating.

For those who are talking to me and @diegocosta struggle today in training he’s lying, he’s one of my best friends and never fight ?

Guus Hiddink, the Chelsea’s interim manager was relatively calm during the incident, having seen such kind of incidents many times over his long career. Both the Brazilian players made peace after the training session.

Both Oscar and Costa have been endured poor seasons for Chelsea, however, they have looked much improved since Hiddink took charge at the club.

The 27-year-old Costa has scored three goals in his last two games, while Oscar produced a terrific performance in Chelsea’s 3-1 win over Sunderland.

Chelsea have improved lately under Hiddink, and are unbeaten in their last four, but the Blues still have plenty of work to do, as they sit uncomfortably 14th in the league table.

It wasn’t really a surprise to see Costa was involved, as the Spain international has built the reputation for his aggressive style of play. Although, such incidents can be ignored, taking into considerations, Chelsea were undergoing an intense session ahead of their Sunday’s FA Cup clash.