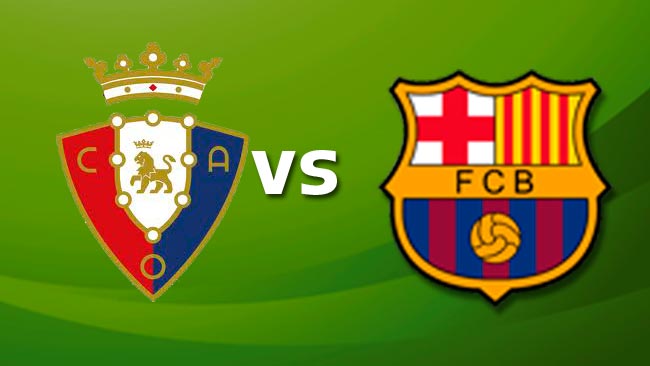 Osasuna host Barcelona in La Liga this weekend, and the Spanish champions will be desperate to close the gap with league leaders, Real Madrid, in a win away from home.

The Catalan giants are currently in second place, six points behind Los Blancos. Barcelona have dropped six points in their last three league games and cannot afford any more slip-ups if they want to win the title this season.

Luis Enrique will be without star winger Neymar and Jeremy Mathieu for tomorrow’s game against Osasuna.

Osasuna are in very poor form right now and are heading into this game on the back of four consecutive defeats. They struggled against relegation-threatened sides like Gijon and Granada, and will struggle to contain a motivated Barcelona side.

Osasuna are struggling in every department and have no real strength that could trouble the visitors. They have conceded freely so far and have managed to score just one goal in their last five matches.

The hosts will be without Didier Digard and Javier Flano for tomorrow’s game.

Barcelona have won 9 of their last 11 matches against Osasuna in all competitions.

Barcelona have drawn their last 3 matches in La Liga.

Barcelona have scored at least 2 goals in 10 of their last 11 matches against Osasuna in all competitions.

Osasuna have lost their last 4 matches in La Liga.

Osasuna have been losing at both half-time and full-time in their last 3 matches in La Liga. Get Barcelona to win both halves at 6/5.

Barcelona have an outstanding record against Osasuna. Bet on them to win at 2/11.

Barcelona have been scoring freely against Osasuna over the last few seasons, and Osasuna have conceded at least 2 goals in 8 of their last 10 matches in La Liga. Over 2.5 goals (4/11) seem likely.

Osasuna’s poor run of form should continue for another week, at the very least. They are severely out of their depth against the defending champions and will struggle to get anything from this game.

Barcelona will be determined to pick up a win after three back-to-back draws and should be able to secure the three points easily.