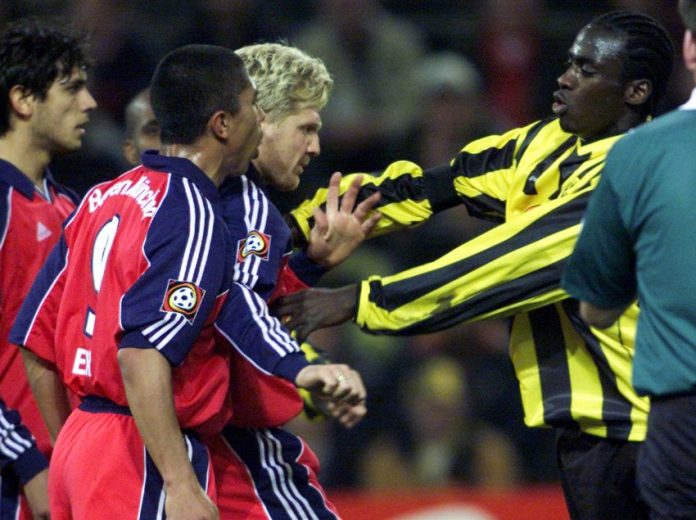 On this day in 2001, Bayern Munich and Borussia Dortmund met in a feisty league fixture that produced 14 yellow and three red cards.

The Bavarians were at the top of the Bundesliga table, leading second placed Dortmund by just one point. Dortmund, playing at home, could have over taken Bayern with a win but the game ended 1-1.

Bayern’s young Paraguayan striker Roque Santa Cruz opened the scoring in the sixth minute and then the fireworks begun. Bayern had a total of six yellow cards before the first half interval with left back Bixente Lizarazu sent off for two yellows.

Dortmund, capitalising on their numerical advantage, equalised in the 52nd minute through forward Fredi Bobic. Minutes after Bobic had scored, Bayern were reduced to nine men after captain Stefan Effenberg was sent off. Despite having two extra men on the pitch, Dortmund could not find the winner. The Black and Yellows had a player of their own sent off in the 9th minute when right back Evanilson received a straight red.

Bayern went on to win the Bundesliga title at the end of the season while Dortmund finished at third.