“Wake up. You didn’t lose the game because of the tactics. We’re simply a better team. I admire your team and your players but my team is a much better team.”

That is what the Croat manager had to say after the game at Wembley. Not only has he used the word ‘team’ four times in two sentences, but he has also purposely made a false statement driven by his desire to rub salt into England’s wounds. Or so I like to think. Truth being told, England were woeful on Wednesday night, but the Croat team — the one which qualified after having beaten England twice — is by no means overall better than the current English team. But the manager… that is another story.

Thursday we will wake up, have a cup of coffee or a glass of whiskey — depending on preferences — turn our computers on and visit the BBC website which will display the ‘Breaking News’ that McClaren has been sacked. It cannot be any other way or a revolution will break out. So terrible has England been in the past eighteen months that some of us are starting to miss the Eriksson days.

Then the madness will begin: the FA will start their search for a new manager. Given that England do not have another competitive match for a whole year, the FA will see the urgency of hiring the first man to send in an application. But who will be that man? Who will dare to put his head under the guillotine? Whoever it will be, he or she — just because you never know how crazy the gentlemen from the FA are — will have the most difficult job in English football. 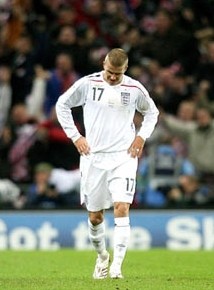 He will have to build a young squad which will reach its prime in the summer of 2010, change the clearly flawed tactics, gain respect from and instil fear in the hearts of his players, find a way to entertain fans and also find a goalkeeper capable of catching a ball. In doing all of this, he must of course ensure that national team shirt sales do not go down and manage to somehow lure fans to Wembley every time England play. Given on what I have seen from England this qualification campaign, I wonder whether it is worth it to watch the game on TV, never mind paying for a ticket to stand in the rain watching a bunch of clowns trying to kick a ball.

The squad issue will be the biggest he will face. It will not only be difficult because the pressure of keeping an impotent Lampard and Mr. I-cannot-make-a-ten-yard-pass Gerrard will be huge, but the truth is that England has to move away from these two players. Whether this has to be done through a step-by-step transition or instantly is debatable. The reality is that both of them need to leave the England team now!

Future squads will be based around the attacking power of young stars Rooney and Agbonlahor, but with Young and Moore also rising in stature, Owen still able to come on as an impact player — he will not be able to play regularly for club and country the way he is these days — and Crouch still not old, England might have some firepower. In defence Taylor of Newcastle is very promising and Richards will be there for years to come since there is no chance of Neville replacing him. Cole is still young and Terry will be around for the next World Cup.

The problem will arise in midfield. Will Huddlestone ever be able to put on an England shirt? Can Hargreaves continue to hold the midfield? Does Barry have a future with England? Can they play Bentley (or, according to Blackburn, Betnely) in central midfield? Who between Walcott, Lennon or SWP will take over the right wing and who will play on the left wing? My answers would be ‘no’, ‘yes’, ‘yes’, ‘yes’, ‘neither’ and ‘still Cole’. However, a professional manager might think otherwise of England’s midfield. There are precious few young, talented central midfielders in England these days and there might be the temptation to play it safe with Lampard or Gerrard, but there is a probability that, should he do this, the next manager will have a very similar fate to that of McClaren or Eriksson. 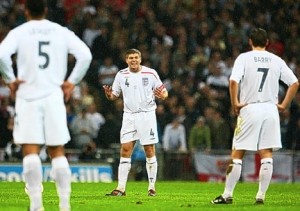 Another big dilemma that the next man in charge of England will face will be choosing a goalkeeper. Can anyone muster the courage to bring Robinson back? Doubtful. Certainly not unless he put on a magical spell for Tottenham. The other possibilities are James who can also be a bit shaky at times, Carson who we just saw make a schoolyard mistake, Foster who definitely has the quality, he just needs to play more and Green who seems to be just the man. Of course there are other options, but these seem to me to be the best.

The England squad, both today’s and the one that will take to the field in 2010, looks to be every manager’s dream on paper. In reality there has been little to smile about for any of England’s previous two managers. What England need now is an experienced manager who can pull of results. Given these criteria, the FA will likely opt for Alan Shearer who has never been in charge of a club. And ahead of us lie another two years of immense frustration and eventual failure. We cannot kid ourselves, England will not turn into a powerhouse overnight, but given the right choice of management and players, it is possible to make them serious contenders by the next World Cup.

Finally we should all begin to understand what Eriksson was all about. He wanted results above all else and he usually delivered — losing in the quarter-finals of three consecutive competitions now sounds a little like paradise. We now get to see that he is really a talented manager, but one of his flaws, one that he shared with McClaren was lack of wit. We need a manager who would take action if all is not right! Ideally, the Special One.