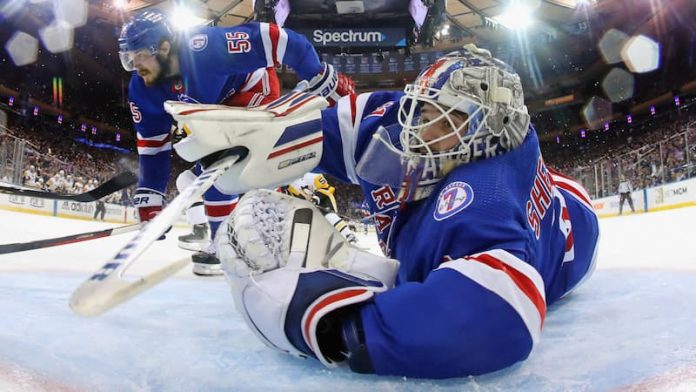 The NHL season is in its second week, and we have 12 games on tonight’s slate. Here at Sportslens we are on hand to offer some expert picks, along with the latest odds among the current NHL betting markets.

The Sharks have dropped five straight and have the daunting task of facing the Rangers in Madison Square Garden tonight. Rangers goaltender Igor Shesterkin has been lights out this season, posting a 3-0-0 record with a 2.68 GAA alongside a 90% save percentage. Sharks goalie Kaapo Kahkonen is expected to make the start tonight, and he’s 0-2-0 with a 4.10 GAA and 81% save percentage.

Look for the Rangers to win this game. Shesterkin doesn’t allow many goals, and NY scores just over four markers per game. 6.5 goals is too many, and you’ll want to play the Under 6.5 tonight.

Dallas is a good-sized dog here, but they are playing great hockey, and Oettinger has been lights out thus far. The Stars score 4.33 goals per game, and the light-scoring Maple Leafs will be in trouble tonight. Take the Stars on the ML and consider playing the Over 6.5 goals, as these two teams have several big-play offensive skaters.

Vancouver is on a four-game losing skid when they head to Minnesota for a matchup with the 0-3-0 Wild. Thatcher Demko should be guarding the cage tonight for the Canucks, and he’s 0-3-0 with a 4.38 GAA and 85% save percentage. His counterpart is expected to be Marc-Andre Fleury, who is making his first start of the season.

Fleury is one of the best goaltenders in the league, and he should have an edge over low-scoring Vancouver. Minnesota scores four goals per contest, but Fleury will handle his business, and the game ends under the 6.5 goal total.

The Hurricanes are the play tonight. They score goals but keep pucks out of their own net, and Anderson should have a terrific night in goal. The Under is also in play tonight, as both sides do a good job defending their goal.