India
Home News nfl tnf new york jets at indianapolis colts preview prediction and picks
Join our Telegram channel to stay up to date on breaking news coverage
NFL fans can claim a $2,500 deposit bonus signing up to Betus to wager on Colts vs Jets

Two teams fighting to remain relevant in the push for AFC playoff spots get set to duke it out on Thursday Night Football. Carson Wentz and the 3-5 Colts prepare to welcome stand-in QB Mike White and the 2-5 Jets.

For a complete preview of the game, injury news, the latest odds available at BetUS, plus Colts vs Jets picks for the game, read on:

Bet on Colts vs Jets at BetUS

BetUS is offering a 125% first-time matched deposit bonus that’s worth up to $2,500 to anyone that signs up with the sportsbook in time for TNF: Colts vs Jets To claim your 125% deposit welcome bonus and get your Colts vs Jets free bets, just follow the simple steps below:

Robert Salah’s New York Jets shocked the NFL world (and our parlays) when they defeated high-flying AFC North opposition the Cincinnati Bengals, 34-31 last Sunday. Stand-in QB Mike White threw for over 430-yards, three TDs, and two picks, while RB Michael Carter had his finest afternoon of the season to date, chalking up 172-yards from scrimmage and one TD.

It was a great team performance by the Jets, who are 3rd in the AFC East, and saw them keep within touching distance of rivals the Pats (4-4), who are in 2nd.

Considering that the Jets offense has turned the ball over 15 times already this season (2nd worst in NFL), the Jets’ 15th ranked defense for Yards allowed is doing pretty well. Teams usually have to work hard to score against Saleh’s D. So, if Mike White continues to deliver on offense, the Colts could be in for a tougher game than some expect…

The Colts, meanwhile, come into tonight’s game off the back of a tough OT defeat to the No.1 team in the division, Tenessee Titans. The Colts had chances to win the game at the depths, but QB Carson Wentz threw two picks, one in the fourth and one in OT, to surrender possession back to the Titans who won 37-34 at home.

Up until the Titans game, Wentz, head only thrown one pick all year. But last week’s performance vs an arch-rival won’t have won him too many new admirers at Lucas Oil Field, and it’ll be interesting to see how the former Phillie star handles the pressure vs Jets tonight.

Enough with the negativity, though. Colts still have the foundations of a good team to work with here. Sophomore RB Jonathan Taylor has emerged as one of the NFL’s elite backs this season (if he wasn’t already), posting 904-YFS and seven TDs to date. And, Sophomore WR Michael Pittman Jr. is beginning to hit form, too: the former USC standout has almost 600-yards to his name already and is on course for well over a 1,000-yard season.

On top of that, now that key members are back fit, the Colts offensive line is creating a lot of time for its QB. And, the defense, while it might not be elite in coverage, does rank No.1 in the NFL for takeaways (18). The Jets will need to play very secure, possession-based football to escape Lucas Oil Stadium with a W tonight. 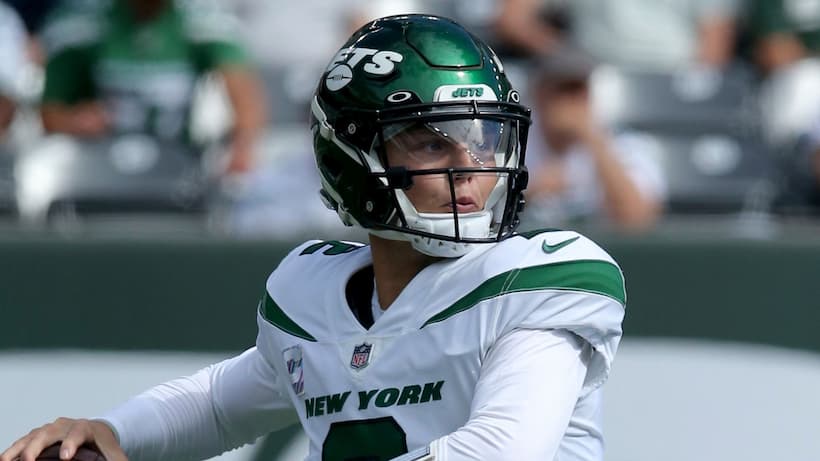 On the Jets offense, one of Mike White – most likely – or the recently recalled Joe Flacco will fill in for rookie QB Zach Wilson, who misses his second straight game with a knee injury. WR1 Corey Davis is also doubtful for the trip to Indiana. Davis has been struggling with a hip injury recently. But, the return to fitness and form of veteran Jamison Crowder has helped offset the damage caused by his absence. LT George Fant will also miss out. On defense, DE Bryce Huff won’t be fit enough to start either.

As for the Colts, Carson Wentz is still QB1 and likely to start. But, yesterday’s news that Sam Ehlinger has been upgraded to permanent QB2 signals pressure for the former Eagle. Wentz must now begin to perform in the big moments if he’s to remain the starter on Frank Reich’s offense. WR Ty Hilton is out after suffering a neck/head/shoulder injury after landing awkwardly vs Titans. The NFL’s best LG, Quenton Nelson, is also a slight concern but the Colts are still hopeful he’ll be able to suit up this evening.

The Jets impressed us with that hard-fought win vs the Bengals last Sunday. So, while there is always a chance that everything implodes in NY, we’re backing Saleh’s defense to ball out and at least keep this game respectable.

Jets to beat the +10.0 spread is our NFL betting Pick for the game.