NFL fans can claim a $1,000 deposit bonus signing up to BetOnline to wager on Browns vs Broncos

Three is the magic number in this week’s edition of Thursday Night Football: Browns vs Broncos. The Broncos have won three, lost three, and sit third in the hyper-competitive AFC West, level with the Kansas City Chiefs. The Browns have played six, won three, and also lost three. Kevin Stefanski’s team is in third place overall in the AFC North.

One of these teams is going to move on with a winning record, and the other will slip to 3-4. As evidenced by the tight odds, this one’s a tough game to call!

So, for a complete preview of the game, injury news, the latest odds available at BetOnline, and our personal NFL picks for the game, read on:

Below are the latest NFL betting odds available for the TNF clash between the Cleveland Browns and the Denver Broncos at the BetOnline sportsbook:

Bet on Browns vs Broncos at BetOnline

BetOnline is offering a 50% matched deposit bonus that’s worth up to $1,000 to anybody joining the sportsbook in time for TNF: Browns vs Broncos

To claim BetOnline’s 50% deposit welcome bonus when you sign up to bet on TNF: Browns vs Broncos, just follow the steps listed below:

Both AFC teams come into this TNF matchup on the back of tough defeats last Sunday. The Browns lost 14-37 at home to cross-division rivals Arizona Cardinals, whereas the Broncos, despite all the 4th quarter heroics, were defeated by a now Jon Gruden-less Las Vegas Raiders, 24-34.

With both the Browns and Broncos at 3-3 in the AFC North and West, respectively, this is a game that could have major implications on the playoff race.

Considering all the hype in the preseason, the Browns have been disappointing in the NFL to date. Other than that one moment when Peoples-Jones caught a Hail-Mary from Mayfield for a TD towards the end of the second quarter, Stefanski’s team was never really in the game. Cardinals QB Kyler Murray (229-yards; 4 TDs) carved up the secondary, and RB James Connor put the defensive line to shame, continuously plowing ahead for extra yards after contact and on important downs to boot.

To be fair to Cleveland, the team’s injury list is about as bad as any other franchise in the NFL, and it’s hard to win a game when your five best players are either injured or banged up (Chubb, Hunt, Mayfield, Beckham Jr., Landry). But, still – this is supposed to be one of the NFL’s elite defensive units, and they sure didn’t look like it vs Arizona.

As for Cleveland’s opponents, the Broncos underperformed last week in a winnable game against AFC West division rivals the Las Vegas Raiders. QB Teddy Bridgewater had himself a game to forget, throwing three interceptions. It wasn’t all the former Panther’s fault, however, the OL gave up five sacks on the afternoon, including three to Max Crosby alone. Raiders hassled Bridgewater and got into his grill wherever he went and the picks came as a result.

In truth, neither of these two teams boasts great offense at present: the Browns lay claim to the NFL’s 26th ranked passing attack, chalking up just shy of 228-yards per game. Stefanski’s has built his offensive schemes around the run, but without Kareem Hunt and Nick Chubb, responsibility will fall on D’Ernest Johnson, and how the third-year back performs on the night is likely to be key to the final outcome.

The Broncos, on the other hand, have been moving the ball pretty well through six games, boasting a mid-tier pass and rush offense. However, Bridgewater has been struggling to convert field position and yards into points – the Broncos rank 23rd in the NFL for points per game and needed to improve if they are to beat the Browns. 21.0 points away in Cleveland is unlikely to be enough. 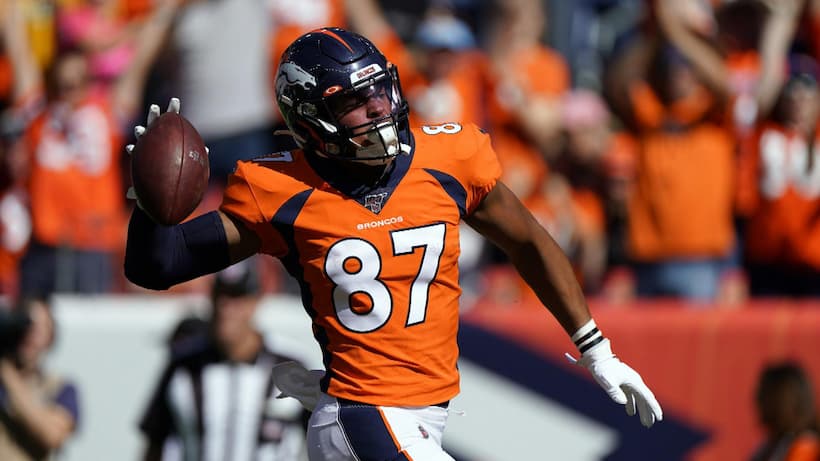 Cleveland has issues at RB heading into the Broncos fixture: RB1 Nick Chubb will definitely miss out as he continues his comeback from a calf injury. RB2 Kareem Hunt is also set for a stint on the sidelines after injuring his calf in the hard-hitting game with the Cardinals last Sunday. Hunt is likely to be out for at least three weeks.

That’s not all for the Browns, though: QB Baker Mayfield is doubtful for the game after falling awkwardly on his shoulder against Arizona. Odel Beckham Jr. is questionable with a grade-3 joint sprain to his shoulder, and offensive line trio Jedrick Wills Jr., J.C. Tretter, and Jack Conklin are also injury concerns for the Browns offense. So, too, TE David Njoku. However, WR Jarvis Landry is back off IR and the Browns expect him to play a role.

On defense, Cleveland added LB Jeremiah Owusu-Koramoah to IR after he injured his ankle, also vs Cardinals. And, there are concerns over the full fitness of DT Malik Jackson, DE Jadeveon Clowney, and LB Mack Wilson. All are expected to feature on TNF, but it’ll be interesting to see what kind of levels the banged-up members of this Browns’ squad are capable of achieving.

As for Denver, QB Teddy Bridgewater is questionable for the game. He’s nursing a foot injury but was limited in Tuesday’s practice and is expected to play. TE Noah Fant is in the exact same boat as Bridgewater – foot injury but likely to feature. The fitness of T Garrett Bolles is a concern, and WR Jerry Jeudy, who’s been missing since Week-2, isn’t likely to make it back in time for the trip to Cleveland either.

The Broncos reported a far cleaner bill of health on defense. Besides S Caden Sterns (questionable) and long-term absentees like Bradley Chubb, there is no new injury news to report.

At full strength and with their one-two punch of Chubb and Hunt in the backfield, we’d take the Browns on the spread. But, without either RB, Cleveland’s game tends to suffer; QB Baker Mayfield’s game management and pass selection is still a cause for concern, and we predict a fruitful day’s work in the Denver secondary as a result.

If the Browns win, it’s likely to be close, so…