For the first time since swapping Massachusetts for Florida, Tom Brady returns to the Gillette Stadium as his Tampa Bay Buccaneers team takes on New England Patriots in a pivotal AFC vs NFC clash.

Bet on Patriots vs Bucs at BetOnline

The BetOnline sportsbook is offering a 50% first-time matched deposit bonus that’s worth up to $1,000 to any newcomer joining the site.

To claim a 50% deposit bonus when you sign up to wager on Patriots vs Bucs, just follow these simple instructions:

No other team in the NFL rung the changes quite like Bill Belichick’s New England Patriots did during the offseason. Besides vouching for Alabama pair QB Mac Jones and DL Christian Barmore (among others) at the NFL Draft, the Patriots recruited heavily during the free agency period, bringing in the likes of TE pairing Jonnu Smith & Hunter Henry, and WRs Nelson Agholor and Kendrick Bourne.

Unfortunately, this new unit is yet to gel and the Patriots sit in 3rd place in the AFC East with a 1-2 record. Up against the Saints last week, New England were a team of nearly- men: Mac Jones kept nearly connecting with Agholor, but the former Raider caught two of eight targets and wound up with just 17 yards. It was the same story with the new TE recruit Jonnu Smith: the former Titan was targeted six times but hauled in just one pass for four yards. A terrible handling error from Smith also saw the ball float straight into the hands of Saints’ Malcolm Jenkins as Jones was taken to the crib for his first Pick 6 in the NFL.

Despite the home loss; the three interceptions and 60% passing accuracy from Mac Jones who, strangely, didn’t actually play that badly, there were signs of encouragement for the Patriots, especially in the second half of the game. Belichick’s team just needs to do better on special teams; the OL needs to tighten up and, most importantly, the offense needs to execute its plays better – it’s that simple.

The Buccaneers come into this game off the back of their first loss of the season. An injury-hit Tampa secondary got taught a lesson by Matthew Stafford and co. vs the Rams, giving up 343-yards and four TDs to the former Lion in a game the Bucs lost 34-24. The Rams look to be genuine Super Bowl contenders, but, taking nothing away from the L.A. win, injuries to the Tampa pass coverage unit definitely played their part in the defeat.

In Bucs’ two previous games, Brady and co. just about got the better of the Cowboys in Week-1, and then trounced the Falcons 48-25 in Week-2 – Tampa is still the team to beat in the NFL. Pound for pound, the Patriots defense is still one of the better in football, but stopping a Bucs offense that averages 34 points per game and is led by the GOAT, Tom Brady, is easier said than done. Patriots fans need their offense to click into gear to stand a chance. 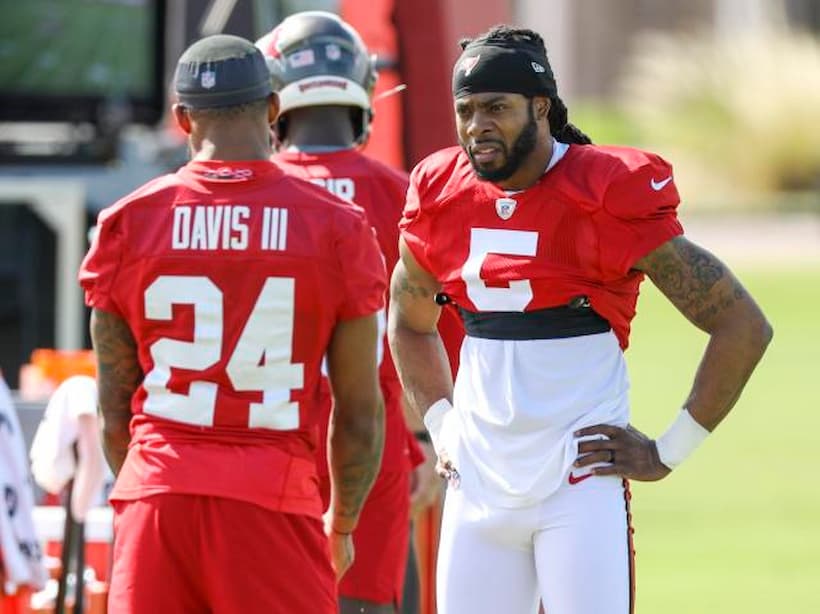 On the injury front, the Patriots will be without RB James White who looks set for a lengthy spell on IR after suffering a hip injury vs the Saints in Week-3. There are issues for coach Belichick at the left and right tackle positions too, with Isaiah Wynn and Trent Brown both listed as questionable for Brady’s homecoming. On defense, starters LB Kyle Van Noy, CB J.C. Jackson, and S Kyle Dugger are also injury concerns for the home team.

Tampa coach Bruce Arians has reacted to his team’s injury crisis in the secondary. With CB pairing James Dean and Sean Murphy-Bunting certain to sit out tonight’s trip to Foxborough, former Seahawk and 5x Pro Bowler Richard Sherman has been drafted in to sure up the pass coverage. Sherman is expected to make his debut tonight. LCB Carlton Davis is questionable for the Bucs.

Historically, you’d never back against the Patriots getting a result at the Gillette Stadium. But this new-look New England team is clearly one in transition, and, to win against last year’s Super Bowl champions, you need to be in a rhythm and playing with confidence.

It’s still too soon to pass judgment on all the new pieces in Bellichick’s offense. The gut feeling in the office is that there is certainly a lot more to come from what, on paper at least, is an exciting group of players led by probably the pick of the rookie QBs to date.

But, after watching a string of mistakes from this Pats offense vs the Saints last week, it’s hard to imagine Belichick’s men being on a level with Tampa tonight…

Bucs to win and cover the -7 spread is our NFL pick for the game.