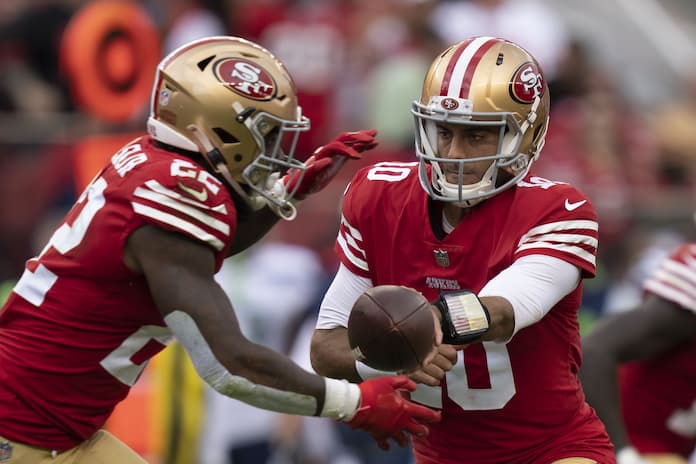 Week 5 of the NFL season will be here before we know it, and we’re back for our second installment of what will be a weekly feature. We were 9-6-0 ATS last week and looking forward to similar results for Week 5.

NFL Picks Against The Spread For Week 4

That’s a big number, but since 2007 the Steelers are 32-23-2 as away underdogs, and that’s too many points even for Buffalo. The Steelers will start a rookie QB with a struggling offense, and a 10th best DVOA defense is going to find a way to slow down Bills QB Josh Allen and somehow cover the spread. Take Pittsburgh (Steelers +14 points -107).

The Chargers have played a tough schedule, and maybe their defense is better than what their current stats say. Look for the Chargers offense to shine here against the No. 30 ranked DVOA defense, and the Los Angeles defense to step up against a Cleveland side averaging 26 points per game against soft defenses. Take the Chargers (Chargers -2.5 -107)

Chicago will likely miss RB David Montgomery, and that will hurt an already challenged Bears offense. Minnesota has too much offensive firepower, and playing at home gives the offense a boost against a Bears defense that hasn’t been tested like they will on Sunday. Take Minnesota (Vikings -7.0 -110)

Detroit may be 1-3-0, but they’re 3-1-0 ATS and meet a Patriots side likely missing starting QB Mac Jones and taking his place is rookie QB Bailey Zappe.  Detroit puts points on the board and fights to the end, and that will be enough to cover the spread and maybe win this one straight-up. Take Lions (Lions +3.0, -110).

Saints QB Jameis Winston is probably going to miss another contest with all sorts of injuries. The Saints have dropped three straight, are 1-3-0 ATS, and face a Seattle side with a couple of serious playmakers in Tyler Locket and DK Metcalf. New Orleans has scored 49 points over their last three games and won’t be able to score enough to cover the number. Take Seattle (Seahawks +5.5 -107)

Dolphins QB Tua Tagovailoa is out, and Teddy Bridgewater is in. Bridgewater is 24-6 ATS as a starter on the road, and he has too many offensive weapons that could do serious damage to a 25th Jets DVOA defense. The Miami DVOA ranking is worse than the Jets, but Miami has played a tough schedule and the Jets offense isn’t good enough to hurt the Fins. Take Miami (Dolphins -3.0 -115).

Atlanta is the only undefeated team ATS (4-0) but they’re without Corderelle Patterson and missing their top offensive player won’t work against one of the best defenses in the pro game. The Bucs offense is banged up and QB Tom Brady is nursing a shoulder injury, but the Tampa Bay defense will rule the day and the offense will find a way to cover. Take Tampa Bay (Buccaneers -8.5 -110)

Washington is 30th in passing DVOA and that’s not going to cut it against a Titans side on a two-game winning streak with a burgeoning tandem between QB Ryan Tannehill and WR Robert Woods. Washington is hoping to end a three-game losing streak and has scored 45 points over their past three contests. Tennessee isn’t the best defensive unit on the planet, but the Titans offense will outscore Washington and cover the spread. Take Tennessee (Titans -2.5 -105)

The Jags have been better than expected, while the Texans are exactly what the pundits said they were. The most surprising aspect of the Jags is their defense, which ranks 6th in DVOA, and we expect this defense to keep the already low-scoring Texans off of the scoreboard. Take Jacksonville (Jags -7.0 -110)

Panthers QB Baker Mayfield has played his way out of the starting lineup, but the Panthers are stuck with him until Sam Darnold can return from injury. San Francisco has one of the best if not THE best defense in the game and Carolina isn’t going to be able to score enough to cover. Take San Francisco (49ers -6.5 -110)

Dallas has reeled off three consecutive victories since QB Dak Prescott and the Cowboys, and its opportunistic defense is going to cause Rams QB Matthew Stafford all sorts of problems. Stafford has more interceptions than TD passes and while LA will likely win this contest, the 1-3-1 ATS Rams won’t be able to cover the 5.5 points. Take Dallas (Cowboys +5.5 -110).

Philly is the lone unbeaten team, but Arizona has played the stronger schedule and is 2-2-0 ATS against the likes of the Rams, Chiefs and Raiders. The Eagles have been impressive and most likely will win this game, but Arizona is covering on Sunday. Take Arizona (Cardinals +5 -110).

The Bengals have reeled off a couple of wins and find themselves as away underdogs vs another 2-2-0 side. Cincy has the 7th ranked DVOA, and it will be the defense that carries the Bengals long enough for Cincinnati QB Joe Burrow to do his thing. I wouldn’t be surprised if Cincinnati doesn’t win this one outright. Take Cincinnati (Bengals +3, +100).

The Raiders defense has been a major letdown, but they have played four potential playoff teams with good offenses. That being said, they face another tough offense Monday Night, and it’s difficult not seeing the Chiefs outscore a Las Vegas offense that hasn’t found the “on” switch yet this season. Take Kansas City (Chiefs -7, -107)