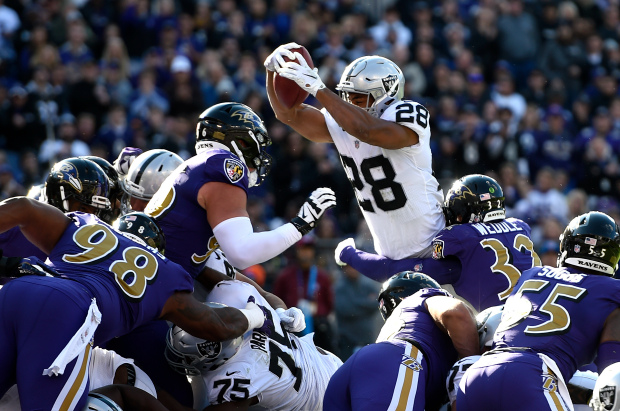 NFL fans can claim a $1,000 deposit bonus and a risk-free $25 Free Player Prop Bet when signing up to BetOnline to wager on MNF tonight!

Read on to get a full preview, a look at the latest odds courtesy of BetOnline, and find out how to claim a cool $25 free prop bet to wager on Lamar Jackson and co. during tonight’s big game.

Take a look at our pick of the best odds available for this game at BetOnline:

The Baltimore Ravens finished second in the AFC North with a winning 11-5 record last season. But Lamar and co. were eventually shut out of the endzone by a great collective effort by the Buffalo Bills defense in the Conference Championship.

Even so, the core of this current Baltimore unit returns for 2021-22, and, led by the 2019 MVP in Jackson, they are a team potentially on the cusp of greatness, so little surprise to see them listed as big favorites for tonight’s game.

The Las Vegas Raiders, on the other hand, just narrowly missed out on a playoff birth last season, finishing 8-8 in a tough AFC West division that features Patrick Mahomes and the Kansas City Chiefs.

Coach Jon Gruden, now in his third year in charge, knows the fans expect progress. So, it’ll be interesting to see how the Raiders fare up against such a stern test in Week-1 – a blowout is unlikely to go down well in L.V!

When it comes to gigantic onboarding bonuses and free bets on tonight’s Ravens vs Raiders clash, it’s hard to look past BetOnline this week.

Each newcomer to Betonline is welcome to a lucrative $1,000 deposit bonus. Plus, with tonight’s game in mind, BetOnline is also dishing out $25 risk-free player prop bets, meaning it’s possible to bank your deposit bonus and simply wager on the aforementioned Lamar Jackson Longest Rush O/18.5 (or any other player prop bet that takes your fancy) completely free of charge!

Click the link below to get yourself set up at the BetOnline Sportsbook and take advantage of these superb NFL betting offers.

Derek Carr will once again be the man under center for the Las Vegas Raiders. A gunslinger, Carr always shows up and last season finished up with 4,103 yards; 27 TDs, and 9 picks despite operating behind a lower-tier offensive line, and despite highly-touted rookie WR Henry Ruggs not exactly setting the ground ablaze.

The challenge for the Raiders was to strengthen the roster around its six-year franchise QB. But did the war room succeed?

Well, most felt Jon Gruden’s Raiders reached slightly when drafting OT Alex Leatherwood at No.17 in this year’s draft. It’s too early to tell, but whether or not the Alabama product is able to find his feet early against a bruising Ravens pass rush could prove to be paramount in tonight’s game, especially with last season’s key component on the OL, Richie Incognito, likely to miss out for L.V.

The addition of Kenyan Drake does give the Raiders one of the NFL’s better one-two punches at running back. But the first part of that punch, Josh Jacobs, is questionable for tonight’s fixture, meaning no real upgrade there either – at least not for Week-1. Last season’s best receiver Nelson Agholor is also long gone – he joined the Patriots during the offseason: Agholor’s replacement, an aging former Raven, Willie Snead lV…

There are definitely some top rookie and sophomore talents taking the field for the Raiders as part of its defensive secondary, which will be great to see. But, is the Raiders D anywhere near the standard of the Ravens’? No. And, offensively, it’s hard to say this Raiders outfit looks any better than last year.

It’s for this reason that, despite the injury crisis currently rocking Baltimore which saw rookie WR Rashod Bateman and RBs Gus Edwards and J.K Dobbins ruled out for the season in quick succession last week, the Ravens still appear the stronger of the two teams on paper. Especially if replacement RBs Latavius Murray and Le’Veon Bell are ready to hit the ground running.

It’s hard to go against the Ravens here: it’s the NFL and, as the Green Bay Packers discovered last night, nothing is ever set in stone. But the Ravens look better all over the roster and, as it’s Week-1, there’s not much else to go on.

Pluck for the superiorly talented Ravens to earn a win on the road at -197. And use that free-player prop bet to wager on Jackson O18.5 Longest Rush to boot.