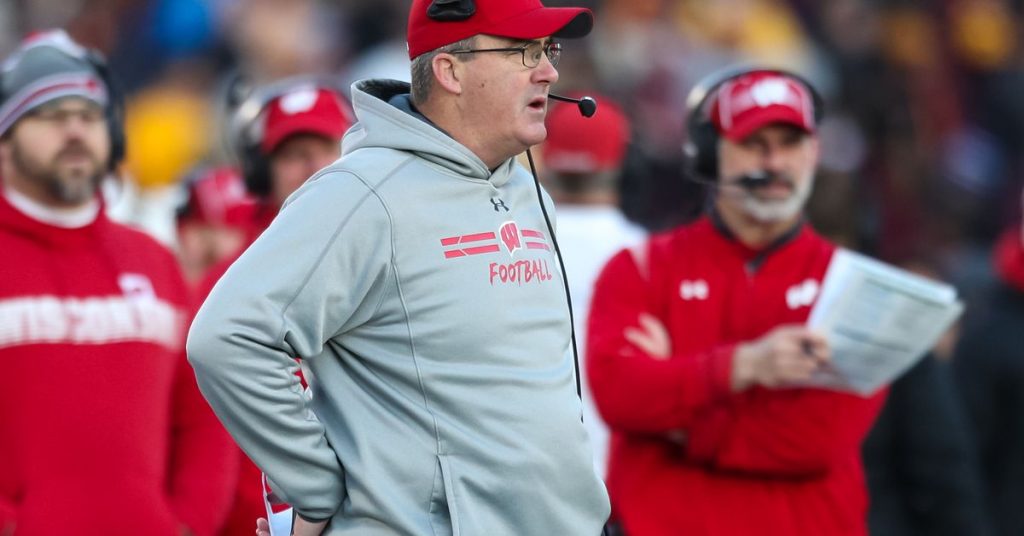 Paul Chryst’s Wisconsin suffered a blowout defeat to Illinois this Saturday. On Sunday, he was fired from his role as head coach and Jim Leonhard was promoted from defensive coordinator to interim head coach.

Chryst had been at Wisconsin since 2015. During his time there he won six bowl games and three Big Ten West division titles. He leaves the program in reasonably good shape and this is probably the most desirable current job opening in college football.

With that being said, let us take a look at how BetOnline price the favorites and longshots to be the next Wisconsin football coach.

Jim Leonhard is the favorite to be the next football coach at Wisconsin. He had a ten year NFL career and took up coaching shortly after. Leonhard joined Paul Chryst’s Wisconsin in 2016 as a defensive backs coach. He quickly became the defensive coordinator in 2017 and remained in that position until becoming the interim head coach on Sunday.

Wisconsin is Leonhard’s alma mater and his defense plays with the same intensity and ferocity he did in his playing days. Last season, Leonhard’s defense gave up less yards per game than any other program in the country. Additionally, they were in the top five in the same metric the two seasons prior. Furthermore, his defenses have consistently been top 10 in points allowed per game over the same period.

It is clear that Leonhard is a bright defensive mind and has earned his shot at this gig. He will be the first one to get a crack at it and seems the right favorite at this time.

Back Jim Leonhard @ +200 with BetOnline

Bill O’Brien is somehow the second favorite according to BetOnline to become the next Wisconsin football coach. O’Brien is currently the OC at Alabama where he has been since the beginning of 2021.

Alabama is currently third in the country in total points per game under O’Brien. However, they also attract the most talent every year and he has a Heisman winner under center. So he has probably performed to expectation so far.

The former Houston Texans head coach does have prior college head coaching experience. O’Brien was in charge of Penn State in 2012 and 2013 before he left for the NFL. During that time he went 15-9 and led Penn State out of a dark time for their program. He should probably be commended for taking on a tough job at that time. However, his time in the NFL did not prove fruitful.

He was fired from the Texans in 2020 after starting the season 0-4. O’Brien was also the GM at the time and drew criticism for his decision making on and off the field. He certainly would not be our first choice but… he is a choice.

The bookies think that Lance Leipold is the third favorite to take over Paul Chryst’s old job. Leipold is currently the head coach at Kansas who have just been ranked in the Top 25 AP poll for the first time since 2009.

Leipold has an interesting career trajectory. He was the head coach at Wisconsin-Whitewater from 2007 to 2014 where he won six NCAA Division III titles. He then had his Division I shot with the Buffalo Bulls. Leipold guided the lowly Bulls to their first ever bowl win and won a total of two in his six seasons in charge. Additionally, the Bulls were ranked in the AP poll their one and only time in Leipold’s last season.

Leipold then took over a struggling Kansas that went 2-10 in his first season. They improved to 5-5 last season before starting this season undefeated in five games and ranked 19th.

Leipold is likely to be one of the most in demand coaches should he continue his progress with this Kansas team. It could be in his best interest to see what other opportunities arise further down the road before jumping into this one.

Back Lance Leipold @ +500 with BetOnline

We are not really sure we understand this one. Dave Aranda was a former DC at Wisconsin from 2013 to 2015 before assuming the same role at LSU.

In 2020, Aranda was appointed head coach of the Baylor Bears. He took the Bears from 2-7 his first year to number sixth in the country at the end of last year.

Aranda is still putting his touches on this Baylor team and we do not really see what there is to gain in a move to Wisconsin at this point in time. Maybe the guys at BetOnline know more than us and if you believe they do, you can back him at +600.

Back Dave Aranda @ +600 with BetOnline

One of the longer shots to take over is Matt Rhule. Rhule took over the Panthers in 2020 and has struggled at the professional level. There are calls for his job on Twitter from Panthers fans every week it seems.

Matt Rhule was at Baylor before Dave Aranda and he was at Temple before that. Rhule did well changing the trajectory of both those teams during his tenure. In his first year at Temple he went 2-10 and just three years later they were nationally ranked and conference champions with a 10-2 record.

Rhule seems to excel in college football and we believe he will find his way back there eventually. However, this doesn’t quite seem like his landing spot to us.

To us, it seems as though Jim Leonhard at +200 is the rightful favorite and could well be the best bet of the lot at the moment.

Back Jim Leonhard @ +200 with BetOnline