Manchester United’s 2-0 win over Sunderland on Saturday kept them in the top four in what is a very tight race for the UEFA Champions League places.

Louis van Gaal’s side have yet to hit top gear in 2015 and may need to increase their performances soon or be at risk of falling outside the top four with Liverpool and Tottenham Hotspur putting up a strong chase.

Newcastle haven’t had much success under John Carver since Alan Pardew left but recorded a 1-0 win over Aston Villa on Saturday to give them a healthy lead above any fears of relegation.

John Carver has a lot of absentees in his squad. In defence, Steven Taylor is out for the season, whilst Paul Dummett is also sidelined. Massadio Haïdara has declared himself fit to face Manchester United though.

Jack Colback is suspended after collecting 10 yellow cards this season. Rémy Cabella is out with a knee injury and Cheick Tioté has been out since New Years Day – he won’t be back anytime soon. Siem de Jong is another long-term absentee in the Newcastle midfield.

Wayne Rooney scored twice as a striker at the weekend with Robin van Persie set for a spell on the sidelines. The Dutch international is Louis van Gaal’s only absentee this evening with Michael Carrick available again. 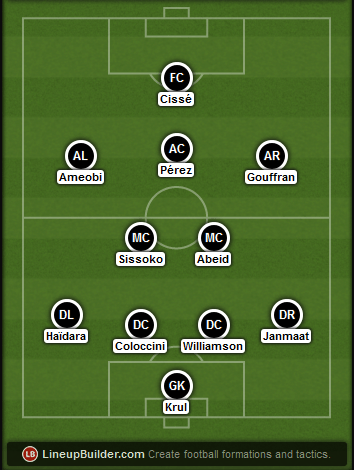 Mehdi Abeid got 90 minutes in front of the back four at the weekend with Jack Colback suspended and Cheick Tioté injured so presumably he’ll start there again this evening. Moussa Sissokho alongside him offers pace and energy in the midfield. Ayoze Pérez behind Papiss Cissé is a clever player who gets in goalscoring positions and will be looking to create space between himself, Daley Blind and the two Manchester United centre-backs. Mike Williamson plays in defence for Newcastle with their absentees. 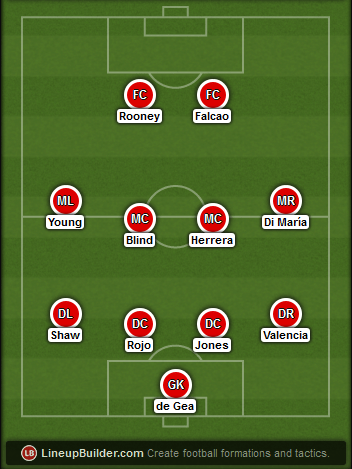 Louis van Gaal continues to change his formations – it was a 4-4-2 at the weekend so let’s see if he goes with that at St James’ Park too. Phil Jones could return in the middle in place of Chris Smalling. Ashley Young offers pace down the left in a midfield that has playmakers down the wings, and in the middle through Ander Herrera. We feel this team is carrying Radamel Falcao but the Colombian has been awesome in the past – surely we’ll see some of that before his time at United is up? The Dutch manager only has James Wilson as an alternative if he wants to play two up top.

Wayne Rooney vs Mike Williamson
Stick Wayne Rooney up front and the goals will come. The United captain scored two against Newcastle’s rivals at the weekend and has a good record versus the Magpies. This Newcastle defence recently conceded five versus Manchester City and two each against fellow top sides Chelsea and Southampton – United have the talent to do similar.

Ander Herrera vs Mehdi Abeid
Newcastle are missing a number of first-team regulars so Manchester United should have a number of positions which they can look to exploit. Mehdi Abeid is relatively inexperienced so we think there’s a good opportunity for Ander Herrera to continue his good run in the centre of the pitch. He’s good at retaining possession and creating chances. He has pace down either wing, Rooney up front and a historically solid striker in Radamel Falcao up front to create chances for.

Ayoze Pérez vs Daley Blind
We like this matchup as Newcastle’s best attacking threat. The Spaniard is a goalscorer by getting himself in good positions. Daley Blind isn’t the quickest and Manchester United’s defence hasn’t been the most solid under van Gaal. He also has pacey players around him to help spring counter attacks and get himself open.

Prediction: Newcastle 1-2 Manchester United
Manchester United may not have impressed us greatly with their performance this year but they continue to get results. On top of that, Newcastle are out of form and have a number of absentees so we think the Red Devils can go to St James’ Park this evening and collect the three points that they will probably need to remain in the top four at the end of the night.