Two teams who were in action in the League Cup midweek and whom have each picked up seven points from their last three Premier League games kick off Saturday’s action at St James’ Park.

Newcastle are on a two-game winning streak after beating Leicester City and Tottenham Hotspur in successive weekends. The Magpies have moved up to 14th place in the table at the start of the weekend – four points behind Liverpool. They should head into this game in extra confident mood having won at Manchester City in the League Cup midweek.

Brendan Rodgers’ side’s back-to-back winning sequence ended last Saturday when they were disappointingly held 0-0 at home by Hull City. The visitors themselves had not been in any sort of form prior to their trip to Anfield either.

Steven Taylor has played Newcastle’s last two games but centre-back Mike Williamson is available again to manager Alan Pardew. Full-back Davide Santon remains absent as he has been all season.

Cheick Tioté has missed the last two games but should be fit to play on Saturday. Siem de Jong is a long-term absentee.

Papiss Cissé is ‘touch and go’ whether he’ll be fit enough to start after missing last weekend’s win at Tottenham with a knee injury. His replacement Ayoze Pérez scored the winner at White Hart Lane.

Mamadou Sakho and José Enrique are both out for at least another another week, whilst Jon Flanagan is a long-term injury.

Daniel Sturridge is still not ready to make his return for Liverpool. 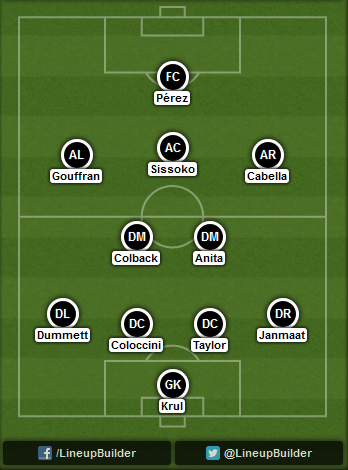 Newcastle have won both league games since Steven Taylor returned in defence and we’re sticking with him to start this one. Vurnon Anita and Jack Colback face competition from a returning Cheick Tioté in centre midfield. Papiss Cissé could replace Ayoze Pérez if fit, but has only started two games this season. Emmanuel Rivière has not featured in the last two after failing to score in his first seven Premier League games. 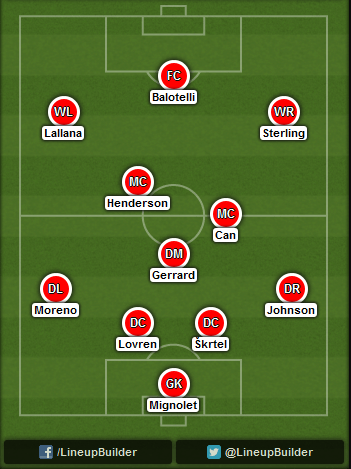 Emre Can has started Liverpool’s last two games and the Reds have yet to concede whilst he’s been on the pitch for 186 minutes across four games. Mario Balotelli’s goal in the League Cup midweek should ensure the Italian striker starts again this weekend but he’s without a goal in his seven Premier League appearances for Liverpool.

Raheem Sterling vs Paul Dummett
Liverpool’s best player to this point so far this season and their top scorer with three Premier League goals, Raheem Sterling’s pace will offer a test to Paul Dummett. The Newcastle left-back scored on his debut in this fixture last year and has started to establish himself in the first-team at the start of this season. Got to fear for him when Sterling is running at him in this match. The England international goes both inside and outside of defenders and has started the season by both scoring and creating chances for teammates.

Jordan Henderson vs Jack Colback
Two former Sunderland players could collide in the centre of midfield in this one. Jack Colback’s performances earned him an England call up earlier this season whilst Jordan Henderson has been a regular in Roy Hodgson’s side. The Liverpool player is certainly more useful for his club than country – Henderson has three assists already this season and creates several chances. Mainly occupying the centre of midfield, Henderson can also drift out wide. Liverpool have a few playmakers in their team and this is certainly one battle to look out for.

Rémy Cabella vs Albert Moreno
One of Newcastle’s summer signings, Rémy Cabella has looked very lively down the right wing in the games he’s played this season. The French international has created more chances than any of his teammates this season, although it wasn’t until last weekend that he recorded his first assist. It was for Ayoze Pérez’s winner at White Hart Lane at least. Liverpool kept only their second clean sheet of the season on the same day but have otherwise been leaky at the back this season. This is an opportunity for Cabella and his attacking teammates to exploit any space at the back.

Prediction: Newcastle 2-2 Liverpool
Two teams that have found some sort of form but neither with the greatest-looking defence. This fixture has produced some exciting encounters over the years and we’re predicting another on Saturday. Hard to call a winner so we’re going with a score draw.