Newcastle have had a decent start to the season. Not a great start with 8 points from 4 games but a steady start which new manager Sam Allardyce had asked for.

Sam has torn the structure of the club apart since he took over as manager of Newcastle United in mid-May and the results of his endeavors are already starting to show through.

Gone are players like Titus Bramble and Kieron Dyer, and while Sam wanted to keep Kieron, Newcastle fans have never been totally convinced of Dyer’s commitment to Newcastle, and most weren’t disappointed to see him 8 years at the club.

With the experienced players Sam has brought into the club, and the final acquisition just before the midnight transfer deadline on Friday of additional defenders Abdoulaye Faye (Bolton) and Habib Beye (Marseilles), Sam has brought in a total 9 players for a total outlay of only â‚¤25M. The net outlay is around â‚¤10M when you consider fees received for outgoing players Scott Parker (West Ham – â‚¤7M), Kieron Dyer (West Ham – â‚¤6M), Nobby Solano (West Ham) and Albert Luque (Ajax)

Of the 9 players brought in six can play in defense. As everybody is well aware, Newcastle’s defense has been weak for at least the last 10 years (under previous managers Keegan, Gullit, Robson, Souness and Roeder) and the first thing Sam said he wanted to do was to strengthen the defense, and he’s done that. It’s so nice to have a down-to-earth manager who looks at the team, identifies the major weakness, and fixes that first — what a concept 😀

In the first 5 games of the season (3 wins, 2 draws) Newcastle have 3 clean sheets and Sam has set a target of at least 10 clean sheets this season in the Premiership.

In a poll conducted earlier this week, on the Newcastle United Blog (these are admittedly Newcastle United Supporters), 61% now think Newcastle can finish in the top six. We believe if we had conducted that poll 3 weeks ago not nearly as many fans would have selected top 6 but rather top 8 or top 10.

Big Sam has been aggressive in the transfer market and has had a huge impact on the club. Newcastle have been relatively successful in the transfer market and Sam’s moves have been backed completely by new chairman Chris Mort and owner Mike Ashley. Newcastle fans are now hoping (and some of us are praying) that top six is not only possible but this is indeed a new era at Newcastle. 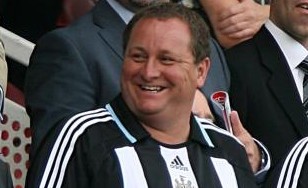 Yes, we know we’ve been here before, many times over the last few years, but signs are there that Sam is building the club from the bottom up. His no-nonsense attitude and down to earth style is going over like gang-busters with the Geordie faithful.

For the Premiership to remain strong, other clubs need to break into the top 4 and break up the consortium of Manchester United, Chelsea, Arsenal and Liverpool. Over the last 4 seasons of the 16 top 4 positions in those seasons – these terms have occupied them 15 times with only Everton breaking the monopoly in season 2004-2005. Everton finished 4th and pushed rivals Liverpool down to 5th place.

The way Aston Villa defeated Chelsea 2-0 on Sunday was one of the few times Chelsea looked to be beaten by a better side and there’s no doubt Aston Villa under Martin O’Neil have looked good this season.

Other teams that can break the top 4 monopoly include West Ham, Everton and Tottenham in no particular order. But Tottenham have again got off to a shaky start despite having a very good team and some excellent players. Many more results like Saturday’s draw at Fulham, when they threw away a 3-1 lead with just 13 minutes to go — will see Martin Jol’s position as manager under very serious threat. If he can’t get the best out of the squad then Tottenham will find somebody else who can.

So we believe the top 4 will be broken up this year with Newcastle making the top six.
Aston Villa, West Ham, Everton, Tottenham and Newcastle also have the quality to break up the top 4 consortium of the last four years.
The sooner that happens the better it will be for the Premier League.