Chelsea striker Michy Batshuayi has been linked with a move away from the club this summer.

The highly talented Belgian has been a squad player for Conte and he should be aiming to play regular first team football next season in order to fulfil his potential.

A loan move could help him develop as a footballer and the likes of Newcastle have been linked with the player in the recent weeks.

According to SkyBet, the Magpies are now odds-on favourites to land the Chelsea striker. 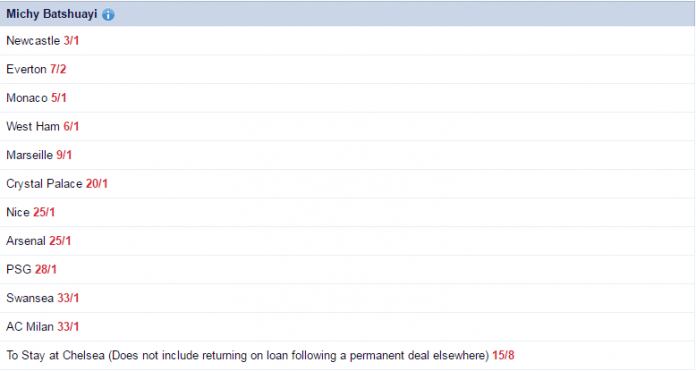 Chelsea signed Batshuayi from Marseille during the summer of 2016 for a fee of £33 million. During his cameos for Chelsea last season, the Belgian has shown that he is a world class talent. However, Diego Costa’s form limited his role to that of an impact player last year.

Batshuayi started only 7 of his 28 matches in all competitions last season and the young forward ended up scoring 9 goals.

Newcastle are looking to improve their squad this summer and Rafa Benitez will be hoping to use his Chelsea connections and sign the Belgian as his key striker for next season. The Spaniard had a good relationship with Micheal Emenalo during his time at Stamford Bridge.

The Magpies will be looking to establish themselves as a Premier League club once again and they need to sign players like Batshuayi in order to do that. It will be interesting to see whether Newcastle make their move now. Chelsea might not be willing to get rid of the player permanently, but a loan move is certainly possible.