New Zealand’s journey takes a similar turn of events to Australia’s four years ago. Despite no South American opposition, and agonizing penalty shootout, the similarities are blatantly obvious for all to see. A two legged playoff against a team pushing for qualification almost as much as the Kiwi’s, it all came down to a home leg played in front of a capacity crowd. The win sparking joyous celebrations in the streets, almost amounting to those of a World Cup winning nation. All that’s left for the small island nation is a complete national competition overhaul, with former Manchester United players joining the competition!

It’s been 28 years since New Zealand’s last world Cup appearance (Spain 1982), as opposed to Australia’s 32 years. Of course, the major similarity is the group draw. Four years ago, Australia’s group draw pitted the Socceroos against previous winner, Brazil. This time around, New Zealand is pitted against previous winner Italy. As with Australia last time, New Zealand’s tag as underdogs can work to their advantage, flying them under the radar, maybe even to the Round of 16. Of course, as the trans-Tasman rivalry goes, if New Zealand manage to go further than the Socceroos, we Aussies will never hear the end of it. 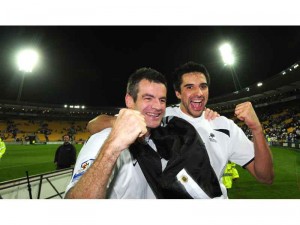 New Zealand has been placed in one of the toughest groups in the cup, possibly the group of death. The All-Whites have a tough challenge in order for them to gain anything out of this group. Despite the relative toughness, NZ coach Ricki Herbert remains adamant that this is a favourable draw. “We’re Pleased”Herbert said. “You always go into (the draw) a little bit tentative on who you might get. Italy is obviously a huge one but great to get. But the other two we’ve got to back ourselves (against).” With such huge spotlight on the group, New Zealand causing an upset would be a huge boost to the development of the sport in the country. The best chance for the New Zealand side to make it to the next round is a win over Slovakia, and at least a draw against Paraguay.

The All-Whites side has many key players that can cause some problems for their group opponents, first up, Glen Moss. The Melbourne goalkeeper has helped his club side challenge Sydney for the top of the table, and will again, along with Mark Paston for New Zealand. Shane Smeltz will once again be up there trying to thump in the goals as he has with Gold Coast this season.