New York were unlucky to have to play New England in the first round of the MLS Cup playoffs in 2007. Finishing third in the Eastern Conference, with a record of twelve wins, seven draws, and eleven losses wasn’t enough to save former US manager Bruce Arena’s job, but an up-and-down season also led to his departure.

In the US Open Cup, New York were ousted by the Galaxy, 3-1, in their first match. The match was a wild one, ending 0-0, but there were four goals scored in extra time. That was New York’s only match other than league matches in 2007.

Whoever ends up being New York’s goalkeeper, whether it be Zach Thornton or Jon Conway, will have to deal with an inexperienced defense. Their involvement will be important for success. 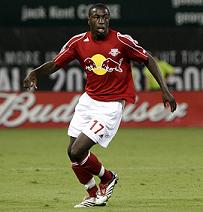 Claudio Reyna, Juan Pablo Angel, and Jozy Altidore will all play crucial parts in determining where the Red Bulls end up. If they have good seasons — Angel and Altidore scoring and Reyna staying healthy — the sky is the limit for their team.

New York has to find a way to plug up the defense. They conceded forty-five goals in 2007, and if that number was lower, they would have been more successful and won more matches.

Jozy Altidore has to be given more playing time. He started only half of New York’s thirty league matches, and if he is given a full season to work with nineteen goal scorer Angel, great things will happen for the team. As it was in 2007, Altidore scored nine goals, second on the team, and assisted four others. If he is given a full season, the MLS will be taken by storm by a kid who is still only eighteen.