The dissolved American club New York Cosmos, played under the unofficial nickname ‘the most glamorous team in the world football’, are known for signing world class players like Pele and Franz Benckenbauer.

The Cosmos are coming back into the brave new world of global football. They haven’t touched the ball since 1985 and currently have no players, no stadium and no games to play.

A group of investors led by club chairman Paul Kemsley after buying the name and rights in 2009. The aim seems to be to re-ablaze the attraction the Cosmos had in their heydays before resuming professional play.

Not much details have been revealed on how much the team will be assembled and how they will get themselves get admitted to the Major League Soccer. So far, they have gone on a goodwill tour to Asia and mainly emphasized on the star quality the Cosmos could bring to the American game.

Players like David Beckham (LA Galaxy), Thierry Henry (New York Red Bulls) are already plying their trade in the MLS making their claim quite a bold one. 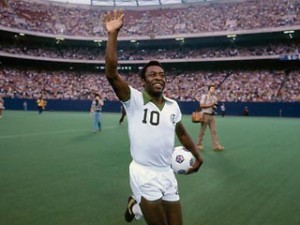 I should mention here that one of the hindrances in the Cosmos entry to the MLS could be their kit manufacturer. MLS is in a deal with adidas which forces every club to only use the German manufacturer as their official sports goods supplier. Whereas, the Cosmos have already had Umbro to design and manufacture their kit (remember, Umbro is a Nike subsidiary so fueling the tension a bit more).

Here is a video released by the PR machine behind the rebirth of the American soccer club:

The New York Cosmos are back!

Even though there isn’t really a physical existence of the club but you can buy their new team shirt. Being a football kits blog, we bring you the brand new New York Cosmos home shirt:

For more details, visit the New York Cosmos official website and you can also buy the Cosmos Umbro shirt from sportslens.com/Store.