In 2007, New England finished in second place in the MLS Cup for the third straight season. In fact, the Revs have been finalists four times and semi-finalists twice in the last six seasons, but they have never won an MLS Cup. This is agonizing for me personally because New England has always been my favorite club, and even when Seattle joins the league next summer, I’ll still have a soft spot for these lads.

The 2007 season brought silverware in the form of the Lamar Hunt U.S. Open Cup, which is the American FA Cup. However, skeptics will look at the fact that the only MLS team New England faced was FC Dallas in the final. They cruised past second and third division teams all the way to the final, beating FC Dallas 3-2.

As with any successful club, New England didn’t shake too many things up in the offseason. Pat Noonan was their biggest loss, moving to Aalesunds FK in Norway. Chris Albright joined from the LA Galaxy.

Normally I like to nominate only one or two key players, but the core of this team is so strong that all four of these players are worth a mention:

Matt Reis is New England’s twice capped goalkeeper. He played in all thirty league matches and kept ten clean sheets in 2007. He is probably my favorite MLS goalkeeper simply because of the calm demeanor he has on the pitch. He instills confidence in all his players. His facial expression never changes, regardless of the situation, and he isn’t fazed by anything. He’s also a fan favorite, and known as quite a joker among his teammates.

Michael Parkhurst holds down the center back position for the Revs. Also capped twice for the USA, his career is still on the rise, and he was the cleanest player in the MLS in 2007, committing only five fouls all season.

Shalrie Joseph has played eleven times for Grenada and is the primary player in the midfield. His speed and passing can unlock any defense. 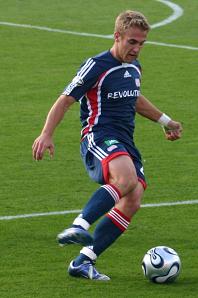 Taylor Twellman is the team’s golden boy, remembered by many for his bicycle kick goal in the MLS Cup semi-finals last season. He scored all three of the team’s goals in the playoffs, and is closing in on MLS’s all-time goal record. He has scored 101 in 177 appearances in all competitions for the Revs.

If New England’s core of key players can stay healthy, they will make another run at the MLS Cup this year. Steve Nicol, the manager since 2002, and the current longest-serving boss in the MLS, seems to know exactly what the team needs to do to be successful. One thing: if Preston North End make another move for Twellman — last year’s bid was rejected, against the player’s wishes — they have to try as hard as possible to hold on to him.