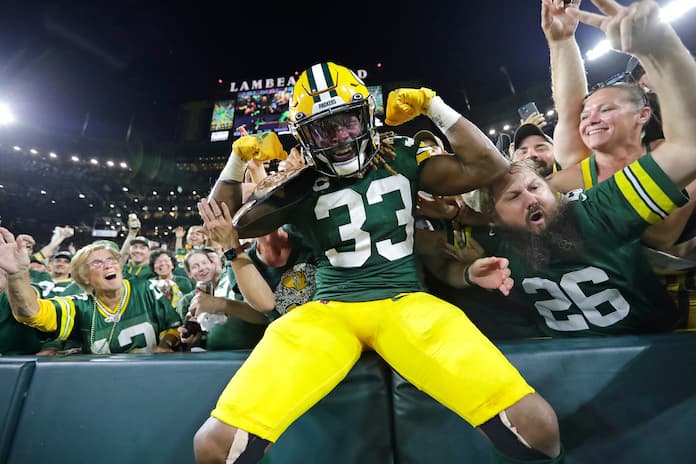 We have a non-conference matchup on Sunday when the New England Patriots meet the Green Bay Packers. We have three plays you can use towards a Single Game Parlay at Betonline and our three picks with a $1000 free bet would net you $7345.99

Join BetOnline And Back Our Patriots vs Packers Same Game Parlay

Patriots QB Mac Jones is doubtful, but even if he plays, he’s thrown more interceptions than TD’s this season. Jones has tossed 13 interceptions over his last eight games, and that isn’t the stuff that will beat the Green Bay Packers.

Green Bay QB Aaron Rodgers has posted pedestrian numbers compared to his career stats, but the Packers gunslinger is beginning to get acquainted with his new wideouts and has tossed four TD passes over the past two contests.

The Pats defense failed their first test of the season last week against Baltimore, and now they’re up against it vs a veteran QB figuring things out. New England allows two TD passes per contest, and Rodgers is going to pick them apart at Lambeau Field.

Brian Hoyer is a career journeyman with a 16-23 record as a starter, and he’s up against a Green Bay defense allowing 319 yards of offense with one TD pass and less than one rushing TD this season.

The juice is far too high to attach the ML to your parlay, but the FH -5.5 number is at a good price, and we’ll play the Packers to cover that number.

Packers RB Aaron Jones hasn’t put the numbers up like he has throughout his career, but he’s rushed for 217 yards and a TD. He faces a Patriots defense allowing less than a TD and if he can get things going early, Rodgers can take to the air and cover the 1st half spread.

A couple of important trends;

This contest at 42.5 points and with the news that Jones may not suit up, that number has fallen to 40.5 points. That number is also too high.

Considering the turnovers, Jones isn’t worth a two-point drop and even if Hoyer ends up being better than Jones, the Pats offense still isn’t very good. New England will likely stick to the ground, where they could have some success against shaky Packers rushing defense. The Pats will move the ball, eat up the clock, and try to keep Rodgers and his offense off of the field as much as possible.

Green Bay isn’t an offensive juggernaut, and we don’t expect them to post a huge number against what will be a very determined Patriots defense hoping to make up for Jones’ absence.