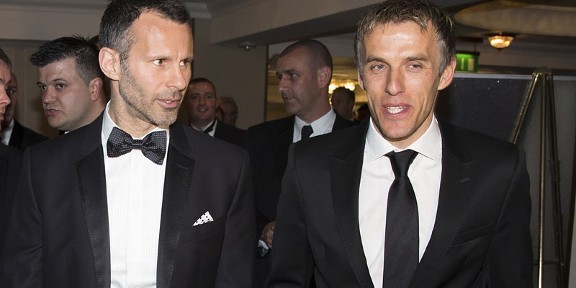 Manchester United legend Ryan Giggs will take up the player-coaching role from next season, the club has announced today.

The 39-year-old, who agreed a one-year contract extension last term, will re-unite with former defender Phil Neville as a member of David Moyes’ backroom staff.

“It’s a great privilege to be appointed a player/coach. I hope I will be able to bring my experience to bear, having been both a player and part of the Manchester United family for so long,” Giggs said as quoted in The Daily Mail.

“It’s no secret that I have been taking my qualifications and I see this as the first step in my future career. I’m really looking forward to working alongside David and the team.”

Former Manchester United defender, Phil Neville, who made his name as a defender under Sir Alex Ferguson, ended his illustrious 18 years of playing career last month. The former Evertonian is also a part of Moyes’ coaching team, having player under Moyes at Goodison Park.

The 36-year-old has been doing his coaching badges for quite some time now and holds the UEFA B Licence award. The former Everton skipper was also a part of the England Under 21s’ coaching staff during the European Championships in Israel.

Giggs, who made the record number of club appearances for the Red Devils, in a sparkling career, spanning over two decades, is working on his coaching badges and expected to complete his UEFA Pro Licence next summer.