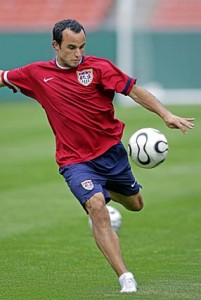 Two teams heading for South Africa in June will meet as the Netherlands hosts the United States in a friendly match on Wednesday, March 3, 2010.

Both teams finished first in their FIFA 2010 World Cup qualifying groups, the Netherlands in UEFA and the United States in CONCACAF. The Dutch have a solid roster but are missing a few players due to injury, including Arsenal’s Robin Van Persie. On the other end, the Americans are without defender Oguchi Onyewu, midfielder Clint Dempsey, and striker Charlie Davies.

One of the areas where the United States has an advantage is at goalkeeper. Tim Howard, currently playing for Everton, is the starting goalkeeper for the USA and has proven himself as one of the elite players at that position. Howard has routinely been in better form for the National Team than Everton. The Netherlands have Maarten Stekelenburg, playing for Eredivisie side Ajax Amsterdam, as their first choice goalkeeper.

Each team will have a starting line-up for almost all European based players. Hunterlaar, Kuyt, Robben, and Sneijder lead the Dutch while Donovan, Altidore, Bradley, and Bocanegra. The battle between the two midfields should be interesting and give some indication on how strong both sides are. The United States is lacking up top without Davies and will have to rely on Eddie Johnson or Robbie Findlay to partner with Altidore.

The Dutch are the stronger team and should win with the match being playing at home. Both managers will be more focused on getting their players in form for June and trying to narrow down who will be on the final roster.

It should be a close match but the home advantage be the difference as the Dutch win 2-1.

You can watch Netherlands v United States live online as well as dozens of other International and World Cup games. Read our live World Cup page for more details.