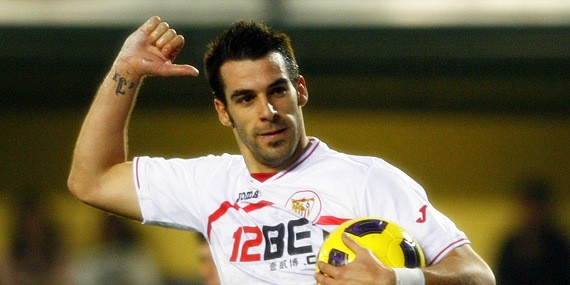 27-year-old Negredo has been in fine form this season having scored 11 goals in all competitions and was tipped to join the Blues army under Spaniard Rafael Benitez.

Negredo was linked heavily with a move to Liverpool, when Benitez was in charge, but the deal never materialized. No wonder that Benitez would have recommended his name to Chelsea hierarchies for a possible move in the winter transfer window.

Chelsea wanted to exploit the parlous financial condition of the Spanish club but the president of Sevilla,

“We do not need to sell now or in June”.

“There are bids on the table for seven players that have been rejected. Negredo, in particular, has refused an offer from a top European team.”

Negredo joined Sevilla in 2009-10 from Almeria, after failing to make the senior grade at Real Madrid for a reported fee of €15 million. He has managed 65 goals in all competitions for Sevilla in four seasons but has managed to score more than 20 goals in a season just once in his career.

Chelsea were in desperate need of a striker after they sold Daniel Sturridge to Liverpool for a fee in the region of £12 million. But the Blues have made Newcastle striker Demba Ba their first signing in January after meeting the player’s £7.5 million release clause.