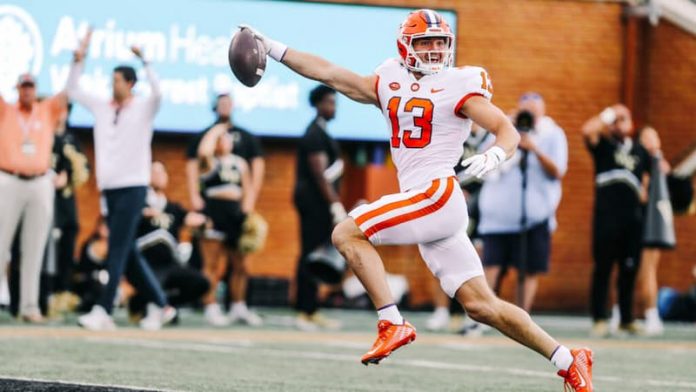 We have a solid ACC Conference matchup on Saturday when the No. 10  ranked NC State Wolfpack vs the No. 5 ranked Clemson Tigers in an important college football contest.

We have three plays you can use towards a NC State-Clemson same game parlay at Betonline and our three picks could net you $6957.93 from the $1000 NCAAF free bet which you can claim below.

This should be a great ACC matchup, but the Tigers are going to cover the 6.5 point spread. Clemson has had the stronger schedule, and maybe the Wolfpack defense isn’t as good as their numbers say they are.

NC State junior QB Devin Leary is a good one, and he should be able to put in work against a secondary allowing 267 passing yards per contest, but Clemson DJ Uiagalelei is having an even better year with better weapons.

Many would think this is going to be a low scoring game, but I disagree with them. We have two pretty good offenses playing in this contest. The Tigers defense is anything but stout and while the Wolfpack defense gets raves, who have they played with an offense as good as Clemson?

I know people are afraid of the weather, but a five-point drop is a bit too much, and maybe the oddsmakers already took the possibility of bad weather into account when they posted the number. Either way, that’s too big a line move, and I think 46 points is about right for this matchup.

These teams also have good ground games, and these offenses are good enough to score in ugly weather. I’m not sold on either defense, and I’m taking the over for the big SGP victory.