Manchester United manager David Moyes was in Portugal a few days back to watch Benfica beat Porto 3-1 in the semi-finals of the Taca de Portugal.

The Red Devils have been linked with several players from the Portuguese league over the past year, and with the presence of Moyes in the stands, the Portuguese press have indulged in the non stop activity of linking players with Manchester United. 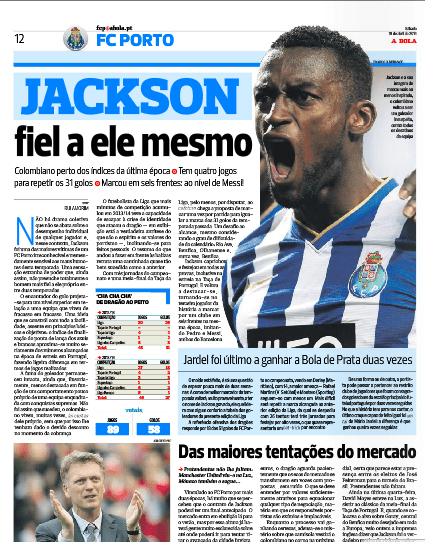 We have had reports claiming that Moyes scouted a host of players from the Portuguese Liga – Garay, Gaitan, Carvalho, Enzo Perez, Mangala et al – and now ‘O Jogo’ and ‘A Bola’ both report that Moyes is showing strong interest in Porto striker Jackson Martinez.

David Moyes will be given a hefty transfer kitty in the summer, but its hard to see him going for a striker, when he has other important areas to concentrate on.