Manchester United manager David Moyes was on a scouting trip in Portugal to watch Benfica beat Porto 3-1 in the semi-finals of the Taca de Portugal.

That the Red Devils need a central midfielder in the summer is known to all and they’ve been linked with several players from Portuguese league in the last 12 months, so naturally with the presence of Moyes in the stands, Portugal press are speculating whom Moyes must have scouted. 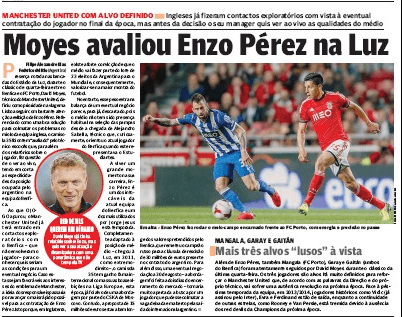 Earlier this season CSKA Moscow bid €15 million for the 28-year-old but that’s way below what Benfica want for Perez and CSKA were told that they’d only sell for his buyout clause of €30m.

It is believed Perez will make the Argentinian World Cup squad so United want to wrap up the deal before the World Cup so his market value doesn’t increase. So, Moyes has been urged to pay his buyout clauses, if he is indeed serious about landing him.