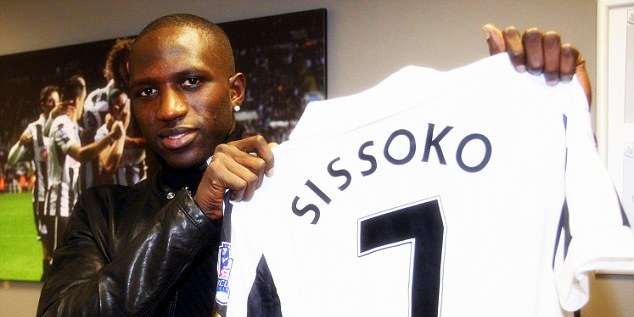 Sissoko becomes the fourth signing of the week for the Magpies and latest Frenchman to move to St James’ Park. He has penned down a six-and-a-half-year deal with the Tyneside club.

Sissoko after graduating from Toulouse youth academy started his senior career in 2007. He made 183 league appearances for the Ligue 1 outfit, scoring 19 goals. In 2009, he earned his first national team call up after covering all the junior grades at international level, and made six appearances for France till date.

The midfielder couldn’t conceal his happiness and expressed his delight in joining the club. He said as quoted in the press:

“I am delighted to be a Newcastle United player.

“This is a massive club playing in the best league in the world, and I believe my style of play is suited to the Premier League.

“I have heard lots about how fantastic the Newcastle supporters are and cannot wait to get started.

“I am rising to a new challenge by coming here and want to firstly help the team improve this season and then progress after that.”

Newcastle have failed to recapture their last season’s form as the club is hovering just over the relegation zone.

It all looked dark and gloom in the January transfer window, when Demba Ba moved to Chelsea and skipper Fabricio Coloccini requested the club to allow him a move to Argentina for personal reasons.

Though Alan Pardew couldn’t stop Ba leaving the club after the Blues triggered his £7.5 million release clause, but he could persuade the skipper to stay put. Further, he has stopped the immediate rot by signing five new players in the winter to add depth and quality in the side.

With the signing of Sissoko, there is now a huge French contingent at Newcastle as he joins fellow compatriots Yoan Gouffran, Massadio Haidara, Mapou Yanga-Mbiwa and Mathieu Debuchy while Hatem Ben Arfa, Gabriel Obertan, Romain Amalfitano, Yohan Cabaye and Sylvain Marveaux were already present at the club.