While all the attention has been shifted to the ongoing transfer saga surrounding David de Gea and Sergio Ramos, behind the scenes Manchester United are looking to complete their second major signing of the summer.

James Ducker of The Times reported today that Germany midfielder Bastian Schweinsteiger is considering an offer to join Manchester United, while French midfielder Morgan Schneiderlin is likely to leave Southampton for Old Trafford. United would sign him for a £24m deal, if Schweinsteiger opts to stay at Bayern. 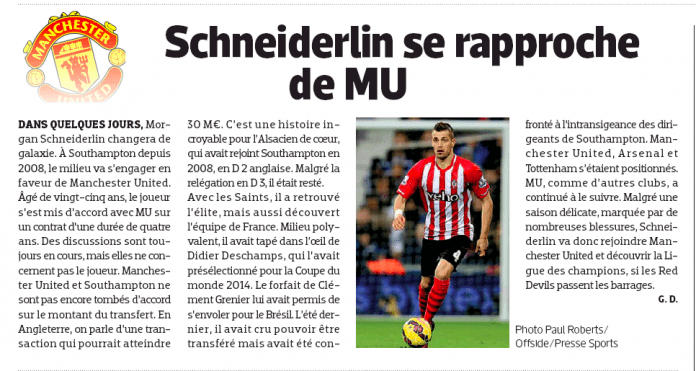 L’Equipe, the French daily newspaper and a trustworthy source, has published a story on Schneiderlin today, where they claim that the French midfielder, who is also a reported target of Arsenal, will join Manchester United in the coming days.

The 25-year-old midfielder has agreed a four-year-contract with Manchester United. Personal deals all agreed, but United still need to agree terms with Southampton. Talks are ongoing at this moment but no deal has been agreed (fee thought to be in the region of €30m) between both the clubs.

Schneiderlin wanted a move away from Southampton last summer but the club rejected his transfer request. Southampton will be powerless to stop him this time, as he has stated his desire to play for a Champions League club next season.