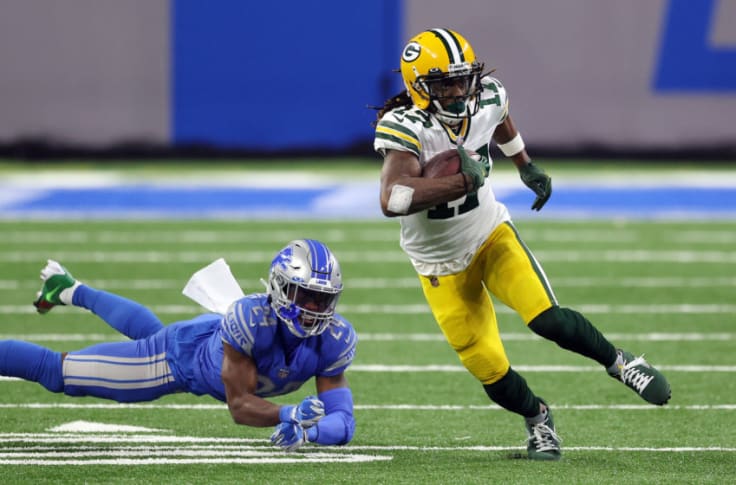 NFL fans can claim a $1,000 deposit bonus and a risk-free $25 Free Player Prop Bet by signing up to BetOnline to wager on MNF tonight!

Aaron Rodgers and the Green Bay Packers have a chance to right the wrongs of last Sunday’s Week-1 blowout defeat to the Saints when they take on Jared Goff and the new-look Detroit Lions at Lambeau Field.

For a full betting preview, as well as the latest odds broadcast at BetOnline, read on.

Despite getting trounced by the Saints in Week-1, it’s hard to look past a Green Bay victory on home turf vs an experienced Lions roster. The sportsbooks are in agreement here, offering long odds on a Detroit win (+430!).

Don’t be tempted to bet on the underdog in this one! Expect to see Aaron Rodgers and co. with some extra pep in their step after last week’s humbling loss. Rodgers to throw +2.5 TDs at -114 is a certainly prop bet that takes our fancy!

With that said, however, the +11.5 spread is high, especially given Green Bay’s solitary outing this season was a disaster. We think the Lions can cover!

The BetOnline sportsbook is offering a $1,000 first-time matched deposit bonus to anyone who signs up to wager on the NFL.

In order to take advantage of this excellent offer, follow these simple steps:

The Green Bay Packers looked like they were still in preseason mode vs the New Orleans Sants last weekend and were beaten soundly, 38-3. Coach Matt LaFleur will know his team, who made it all the way to the Conference Championship just eight months ago is much better than that performance, however, and will expect a result on home turf in front of the Cheeseheads.

The Detroit Lions, now led by former Ram Jared Goff under center, is very much a work in progress, as evidenced by their defeat to the 49ers on the opening weekend. The 33-41 scoreline flatters the Lions: with the game already won, the San Francisco defense took its foot off the gas in the final quarter and allowed two touchdowns.

In the recent meetings between these two franchises, Green Bay has come out on top in seven of the last twelve, including the last four in a row.

On the injury front, Green Bay has some concerns regarding its offensive line, with LT David Bakhtiari definitely ruled out and LG Lucas Patrick listed as questionable for tonight’s game. Bakhtiari, in particular, was a huge miss during last week’s loss to the Saints. Safeties Darnell Savage and Vernon Scott are also unlikely to suit up at the Lambeau.

For the Lions, sophomore RB D’Andre Swift is questionable, meaning an increased workload for the former Packer Jamaal Williams in the offensive backfield. WR Tyrell Williams is also listed as questionable, so expect to see targets for exciting rookie Amon-Ra St. Brown. On the defensive side of things, DE Michael Brockers and LB Trey Flowers are also doubts.

Following humbling Week-1 defeats, both franchises will be desperate to kickstart their respective seasons with a big win tonight.

The Packers have the better, more experienced team; a better QB, and home-field advantage though. So, it’s almost impossible to picture them losing this one…

We just have a sneaky suspicion the winning margin on the spread is exaggerated. As such, the Packers to win but the Lions to cover the +11.5 spread at -105 looks the safest bet.