Our last column, inspired at 2AM, carefully selected winners for MLS season openers. Some were slightly off, and today we discuss why these results went topsy and what to expect down the road.

Result: Seattle 3-0 New York
Prediction: New York 3-2 Seattle
Excuse: Seattle is a strong team, Sigi Schmid a champion coach, the fans passionate, the owners pulled the stops, but this result was better than chemistry. Hot young striker Fredy Montero triggered the magic and joyfully scored two goals and an assist. Even the glib announcers were blinded by the polish in this playoff bound team. They ate New York for lunch.

There is no excuse for New York. This was appalling. New Yorkers are heartless and largely responsible for the global economic collapse, borne of greed and corruption. They deserve this hopeless team. Learn from it.

Result: 1-1
Prediction: Columbus 3-1 Houston
Excuse: Loss of faith in virtue (see above). In a well-played game, it came down to the classic battle of two kings facing off. Brian Ching scored for Dynamo, Guillermo Barros Schelloto for Columbus. See them both in the playoffs. 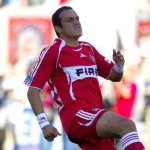 Result: Chicago 3-1 Dallas
Prediction: 2-2
Excuse: 2AM, tequila. Cuautehmoc Blanco and Brian McBride are older, but not heading to pasture anytime soon. They both scored, Blanco ten minutes after entering the field at 79 minutes. Justin Mapp left his mark, Chris Rolfe will, and Chicago will be in the playoffs.

Dallas will struggle again this year, but Kenny Cooper’s blast from 60 yards distinguishes him from other MLS players – he’s the #1 reason to watch Dallas play. It might have been only one goal, but it was worth two.

Result: Toronto 3—2 Kansas City
Prediction: Toronto 3-1 Kansas City
Excuse: None, pretty much called it. Amado Guevara scored 2, Jim Brennan the other, and Toronto won its first season opener in its three-year history and it’s fifth away win. Expect to see more and their first trip to the playoffs. As predicted, the Wizard’s Davy Arnoud made the difference with two goals, but wins will be few and far between for KC.

Result: New England 1-0 San Jose
Prediction: San Jose 2-1 New England
Excuse: Quakes were disorganized and should have done better, unable to tally even though three of the four Revs defenders were rookies. The replacements kept it simple and persevered, but their future depends on the fitness of sidelined Steve Ralston, Taylor Twellman, Gabriel Badilla, Mauricio Castro, and two incoming players from Ghana. That’s a lot of X factors for the Revs and a thumbs-down for the Quakes.

Result: Chivas USA 2-1 Colorado
Prediction: Colorado 2-0 Chivas
Excuse: Paulo Nagamura not on radar. He is now, after scoring two second-half goals for Chivas in an ugly, physical match. Omar Cummings scored for the Rapids, but both these teams must improve to reach sea level.

Results: 2-2
Prediction: Galaxy 3-2 United
Excuse: None. Donovan comes from behind with a header and a penalty. LA will prosper this year, DC will not. See LA in the playoffs with David Beckham. Put money on it.

March 17, the USL-1 Puerto Rico Islanders trounced five-time CONCACAF champion Cruz Azul 2-0 in the CONCACAF semifinals with goals by Nicholas Addlery and Sandy Gbandi and clutch saves by Bill Gaudette. The Islanders face Santos Laguna (2-1 Atlante) April 28 in the return leg and could earn a berth in the FIFA World Championship.

They USL-1 Islanders danced past last MLS hold-out Houston Dynamo (3-0 loss to Atlante) and long outlived New England Revolution, DC United, and Chivas USA in the tournament. USL-1 Montreal Impact, cut down in the semi-finals, also went beyond every MLS squad but Houston.

How did this happen? How did these players fly under MLS radar? Coach Colin Clarke previously coached FC Dallas, keeper Bill Gaudette played for Columbus Crew, and striker Nicholas Addlery was a DC United reject. How did two teams from a lower league accomplish this with so little fanfare?

Revolution coach and former Liverpool defender Steve Nicol shared his thoughts with us.

LE: How do you explain how USL went beyond MLS in the CONCACAF tournament?

Nicol: I think it’s a fantastic result. For them to be where there are and get the results they are, it’s fantastic. The coach they have in [Colin] Clark — he’s been around, he was smart as a player and he’s smart as a coach, he has them well organized. Clearly their opponents are better paid, supposedly better qualified to win matches, but it shows you that some heart and good organization — and some ability as well — can take you a long way.

LE: Did the packed schedule hold MLS back last year or are Montreal and the Islanders really talented?

Nicol: I don’t think the MLS schedule had anything to do with it. They did well in their own right, shown that they’ve got ability, they’re well-organized and they’ve got heart. You put all these things together and it takes some beating.

MLS awards franchises to Vancouver and Portland in 2011, promises two more in 2012

The proximity and fanbase of these northwest cities may have played into the decision, but more likely the deep pockets of investors and the likelihood of soccer specific stadiums in uncertain financial times factored heavily in the equation.

The Vancouver Whitecaps investors are by Greg Kerfoot, Steve Luczo, Jeff Mallett, and Steve Nash. Nash is a two-time NBA MVP and like Mallet, (former president of Yahoo!) is an investor in Women’s Professional Soccer. Vancouver is hosting the 2010 winter Olympics and contracted to renovate the BC Place stadium from 60,000 to a 20,000 seat soccer specific stadium at a cost of $360 milion for the event. The stadium will have a retractable roof and a centrally hung scoreboard, the first in MLS.

Montreal was favored over Vancouver earlier this winter, but Montreal proposed the 13,000 seat Stade Saputo, which doesn’t line-up with the more ambitious MLS plans. The Vancouver deal went through at $35 million, not the $40 million fee. Saturday the Whitecaps sold four thousand season tickets out of 16,500 in just three hours.

Portland agreed to renovate PGE Park to the satisfaction of MLS, and has the wherewithal to do it. Owner Merritt Paulson and his father former U.S. Treasury Secretary Henry Paulson, that currently own USL Timbers, are well-heeled and have the background. Merritt Paulson was previously the Senior Director of Marketing and Business Development at NBA Entertainment.

“The Portland City Council’s recent approval of the framework for the renovations of PGE Park was a key factor in Portland becoming our 18th team,” said Commissioner Garber.