The Seattle Sounders management did everything right to create a model club, including stealing 2008 MLS Cup Champion coach Sigi Schmid from Columbus Crew.

The supporters group, FC Alliance can vote out the general manager, currently Adrian Hanauer, every four years if 20% of the members sign a petition, an idea lifted from Real Madrid and Barcelona.

Comedian/owner Drew Carey put full media spin behind the club, which sold 22,000 season tickets and 32,400 seats for the opening game. “We’ll have this big drunken march down to the stadium before the game begins,” said Carey.

The inevitable and highly suspect predictions:

In a league where parity is king, it’s pointless to discuss MLS Cup at this point, so without further ado, here are the predictions for the season openers:

The Sounders have Kasey Keller in net, but designated player Freddie Ljungberg, recovering from hip surgery, might not take the field. Young Columbian Fredy Montero and Nate Jaqua are the strike force, and with central defender Jhon Kennedy Hurtado, this team could be a threat on short notice.

Danny Cepero, who scored the first goal by an MLS goalkeeper in his very first game, will continue his own fairy tale by substituting for Jon Conway, still suspended. The Bulls won their last preseason match 2-0 with Crystal Palace, with goals by Khano Smith and Mathew Mboto. 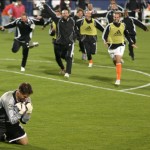 The Chicago Fire will succeed as expected with Cuauhtemoc Blanco, Brian McBride and Chris Rolfe, but the individual efforts of Dallas Kenny Cooper, Dave van den Bergh, and Dax McCarty will throw off their game.

Toronto has a team set on scoring and Captain Jim Brennan and Dwayne DeRosario will make it happen along with Pablo Vitti, Chad Barrett and Danny Dichio. The fans want goals and the fans will get goals with this roster.

Jimmy Conrad, Davy Arnoud, and the rest of Kansas City will be hard pressed to keep TFC from running up the score. 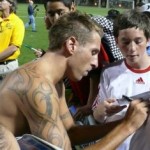 The Revolution lost three big players over the winter and replaced them with untested rookies while dealing with serious injuries to goal scorers Steve Ralston and Taylor Twellman. Shalrie Joseph, Jay Heaps and Chris Albright will control the back, but this team needs attacking players. Although the Revolution have troubles, they keep their spirits up by humiliating their coaches.

Jason Kreis kept the Rapids intact with linchpins Omar Cummings, Conor Casey, Colin Clark, and Pablo Mastroeni, and beat the Sounders in preseason. Sasha Kljestan, Jonathan Bornstein, and Ante Razov will toil for Chivas but it may not be enough.

LA will come off solid, thanks to Bruce Arena, who shook the team up top to bottom. Edson Buddle, Landon Donovan, and Dema Kovalenko will score goals without David Beckham, but still need to solidify a backline, particularly with the absence of new keeper Donovan Ricketts due to injury. DC also may be handicapped by the absence of their keeper Louis Crayton due to injury, but Francis Doe, Thabiso Khumalo, and Santino Quaranta will provide a show in the top half of the field.

Javier Morales, Yura Movsisyan, and Kyle Beckerman give Real Salt Lake the stability and creativity to challenge the new Seattle Sounders, while still producing episodes of the Kyle and Javi show.

National teams drop in the clutch

The women’s national team failed to win their third straight Algarve Cup, handing it over to Sweden in penalty kicks after the 1-1 tie. Shannon Boxx scored for the US in the 90th minute.

The men’s U-20s fell 3-0 to Costa Rica in the CONCACAF Championship final, but secured a spot in the U-20 World Cup in Egypt with their 2-0 win over El Salvador.

A few days before bowing out of the proposed Barca Miami franchise, Barca president Joan Laporta toured the site of the stadium being constructed for the approved 2010 Philadephia MLS franchise. Don Garber told Sports Business Journal, “the team has secured more than 6,000 season ticket deposits and two sponsors a year before kicking off,” but Philadephia is looking for partners. MLS Philadelphia CEO Nick Sakiewicz said that Delaware County and Pennsylvannia put up $77 million and expects Jay Sugarman, the majority owner-operator, and his fellow investors to produce the $38 million balance.

“FC Barcelona has expressed for some time an interest in Major League Soccer financially and strategically,” said Don Garber. “They spent a great deal of time with us looking at Miami and are continuing to look at opportunities around the league.”