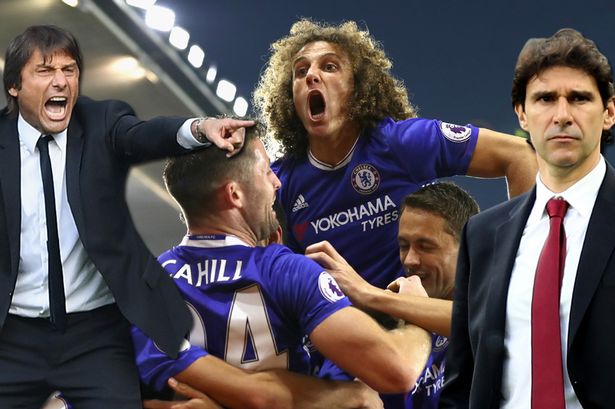 Chelsea travel to Middlesbrough in the Premier League this weekend, and Antonio Conte‘s men will be looking to continue their excellent run of form with another win here.

Chelsea are in outstanding form right now, and have won their last five matches in all competitions. On top of that, the Blues have kept a clean sheet in all of those games.

The London giants are just one point behind league leaders Liverpool, and will look to close the gap this weekend. Furthermore, they will be confident about getting a result because of their impeccable head-to-head record against Middlesbrough as well.

The two sides have not played each other since 2013, but Chelsea have won each of their last six matches against Middlesbrough, and haven’t conceded a goal in that time.

Marco van Ginkel and Kurt Zouma are recovering well and should return to first team action soon. Diego Costa was forced to withdraw from the Spain squad with a groin injury and is a doubt for Sunday’s match. It is a similar case with Eden Hazard. The Belgian was forced off midway through Belgium’s match against Estonia.

Cesc Fàbregas and Ruben Loftus-Cheek are also doubtful for the trip.

Middlesbrough have a massive challenge in front of them when Chelsea come to town.

The home side have a terrible record against the Blues, but will be looking to pull off an upset, especially after their performances against City and Arsenal. Boro managed to draw against both of them and will look to shut down Chelsea, too.

The last time Middlesbrough won against Chelsea was in 2006 when Mark Viduka and Emanuel Pogatetz scored.

Daniel Ayala has been sidelined for two matches with an ankle injury and remains a doubt here. James Husband is lacking in match fitness, and George Friend has picked up a knock in training.

Chelsea have kept a clean sheet in their last 5 matches in the Premier League.

Chelsea have won their last 5 matches in the Premier League.

Chelsea have scored at least 2 goals in 9 of their last 11 matches in the Premier League.

There have been over 2.5 goals scored in 9 of Chelsea’s last 11 games in the Premier League. Bet on a high scoring game.

Chelsea have been winning at both half-time and full-time in their last 4 matches in the Premier League. Bet on Chelsea to win both halves at 14/5.

Chelsea have an excellent record against Boro. Get them to win at 4/7.

Middlesbrough were very good defensively against the likes of City and Arsenal, but the absence of Ayala is a major blow for them this week.

Chelsea are in tremendous form right now and should be able to find a way past their resistance.

An away win seems very likely here, although Middlesbrough are expected to put up a fight.