For reasons unknown, Portugal press are convinced that Manchester United will sign Nicolas Gaitan in the summer. If you scan through the Portuguese newspapers, you won’t find the name Pedro Rodriguez appearing anywhere in any Manchester United related transfer article. It’s strange.

Portugal newspaper A Bola have another update on Nicolas Gaitan in their newspaper edition today. The Argentine winger has been a long term target of Manchester United, and he is being linked with a move to Old Trafford in almost every transfer window, including this summer as well. 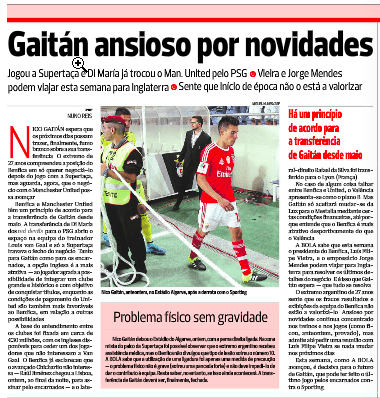 Benfica and United have a verbal / unwritten agreement for Gaitan’s transfer since May. The player’s agent also confirmed about the deal in an interview couple of months back. It was believed that United would sign Gaitan, if Di Maria was sold in the summer. Now that the Argentine winger has left for PSG, there’s room for another Argentine to cover that position at United.

Gaitan is anxious to play for the Red Devils. He might have played his last match for Benfica against Sporting Lisbon on Sunday, where he picked up a small knock in the match, but it was nothing serious. The Argentine winger has said possible goodbye to his fans and team mates as he sets his heart on joining United.

The report also adds that Benfica’s president along with super agent Jorge Mendes will be flying to England soon to finalise the deal for Gaitan, which is thought to be the region of €30m. Pedro who?