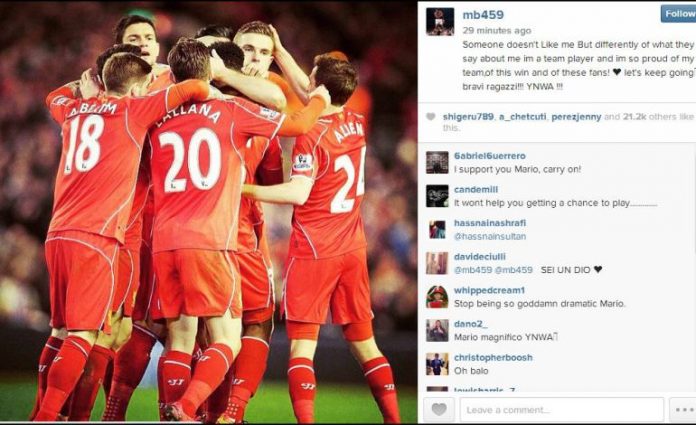 Liverpool are flying high at the moment, after earning a 2-0 win over Burnley on Wednesday night & remaining unbeaten in 12 matches in the Premier League.

Under Rodgers’ new system, the new signings seem have settled down, but Mario Balotelli still remains an enigma.

The Italian striker was left on the bench on Wednesday night and he vented his frustration on social media.

He posted a picture on his personal instagram of his team mates celebrating the victory, with an added message:

“Someone doesn’t like me But differently of what they say about me im a team player and im so proud of my team, of this win and of these fans! let’s keep going bravi ragazzi!!!YNWA!!!”

Who is someone here? Can it be Brendan Rodgers? Highly likely because the gaffer makes the final call in team selection.

Balotelli has been in fine form of late, scoring the winner against Spurs and putting a strong performance against Crystal Palace. He was left unused yesterday with Rickie Lambert being used ahead of him.

Latest report: LFCZA pointed out that it was directed at the singing away fans (Burnley) who were singing how sh*t he was etc etc. Confirmed by a few sitting in the Anfield Road End.

Thank you for clearing that out…