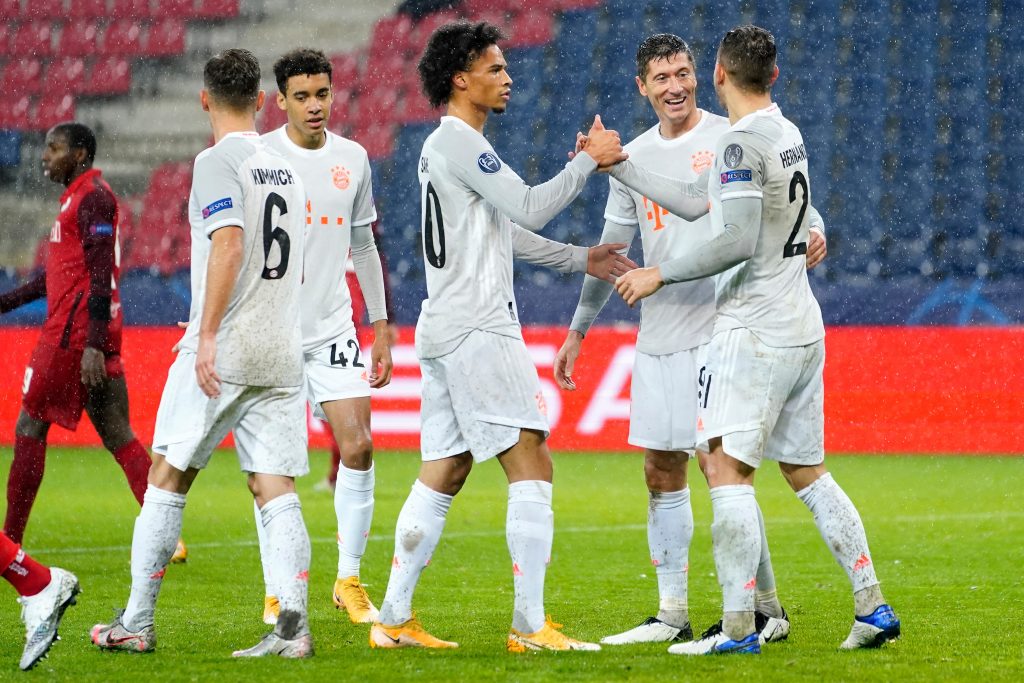 Once again, we have a plethora of exciting fixtures on the schedule across Europe’s top five leagues this weekend.

There are two key matches to keep an eye on in the Premier League. Manchester City will be looking for a much-needed three points when they host league leaders Liverpool at the Etihad Stadium on Sunday.

Manchester United visit Everton the previous day in desperate need of a positive result following their disappointing performance in Europe in midweek.

Over in Germany’s top-flight, the two most successful clubs in the Bundesliga clash as Borussia Dortmund take on Bayern Munich at Signal Iduna Park.

In Serie A, there will be two fixtures that are sure to provide some entertainment. Juventus play Simone Inzaghi’s Lazio, while Atalanta face Inter Milan in Bergamo.

With City looking to give the Reds a run for their money in the title race, this match will have major implications.

Pep Guardiola’s side has endured a dismal start to the Premier League campaign, currently in 10th spot with a 3-2-1 record. Goals have been far and few between for the Citizens but, on a positive note, they’re unbeaten in their last seven appearances in all competitions while conceding just three times.

City are coming off a mid-week 3-0 Champions League victory over Olympiacos and have yet to lose in UCL play this season. But, their form must improve domestically if they want any shot at contending for the Premier League title.

A victory against Liverpool this Sunday will be vital as they will be looking to replicate their last meeting with the Merseysiders, where they beat them 4-0 in July.

The stats behind two of the greatest teams in @premierleague history 🔥

What will the next chapter bring on Sunday?

Liverpool have continued their dominance this season in England, other than their 7-2 defeat to Aston Villa in early October.

Since that embarrassing performance, Jurgen Klopp’s side has been flawless, going undefeated in six matches. Along the way, they’ve tied Everton, while beating Sheffield United and West Ham.

They’re also perfect in European action and are fresh off a 5-0 thrashing of Atalanta on Tuesday where Diogo Jota bagged a hat-trick.

The former Wolves star has been a breath of fresh air in the final third, already scoring seven times in just eight appearances across all competitions. He’s given Klopp more depth and versatility in the frontline and has quickly adjusted to life at Anfield.

Liverpool are just five points ahead of Manchester City in the Premier League table right now, so this match is an extremely important one for both sides.

It’s safe to say that Man United’s season has been a massive disappointment so far. They’re currently 15th in the Premier League table with a 2-1-3 record.

They were impressing in Champions League play with consecutive victories against Paris Saint-Germain and RB Leipzig, but their European form took a turn for the worse on Wednesday, handing Istanbul Basaksehir their first UCL victory ever in a 2-1 defeat.

They’re still atop Group H with six points, but it’s in England where they must drastically improve.

Last time out in league play, the Red Devils suffered a 1-0 defeat to Arsenal thanks to Pierre-Emerick Aubameyang’s spot-kick in the 69th minute.

Other than their back-to-back defeats, it seemed as Ole Gunnar Solskjaer’s men were finding their form. Saturday’s clash will certainly not be an easy one against a solid Everton side, but they desperately need three points in order to get themselves out of the gutter.

The Toffees started off the campaign in fine fashion with four-straight victories. But they’ve slipped since then, tying Liverpool 2-2 then losing their last two matches to Southampton and Newcastle United.

Carlo Ancelotti’s squad will be feeling optimistic they will pick up at least a point after tying the last two meetings with the Red Devils and winning the one prior.

But, a victory will be the number one objective as they look to take advantage of United’s recent struggles. They’ve yet to lose this season at Goodison, as home soil has treated them well.

👊 | “We need to keep the confidence and belief and positive energy around the place that has served us so well.”

Although they haven’t won a game since October 3, Dominic Calvert-Lewin has continued to shine for the Toffees, taking his goal total to eight after another tally last weekend against the Magpies. The Englishman is currently tied with Tottenham’s Heung-min Son for first place in the Golden Boot race.

This will surely be an exciting match to watch on Saturday at Goodison Park. United need the points more than Everton, but both sides enter in poor form and will be looking to turn things around.

The most historic rivalry in German football takes centre stage on Saturday at Signal Iduna Park.

As always, Dortmund find themselves chasing table-toppers Bayern Munich. They’re both on 15 points in the Bundesliga table, but the current title-holders hold first place thanks to their ridiculous goal difference. BVB have been outstanding defensively, conceding just two goals all season in the Bundesliga.

In European play, they’ve also let in just three goals and that was in their lone defeat in the group stage against Lazio. As a whole, Lucien Favre’s side has looked electric in all areas, led by Erling Haland up top. The Norwegian phenom already has nine goals in all competitions, with five of those tallies coming in Germany.

From Gio Reyna to Jude Bellingham to Jadon Sancho, this side is oozing with young talent. However, this will be their first serious test against a Bayern team who have completely destroyed anyone who’s stepped on the pitch with them over the last number of months.

The current European and German champions have continued to run riot against any opponent, losing just once all season. They’ve already bagged 24 goals in just six Bundesliga appearances, while also netting 12 times in only three UCL matches.

Tied 2-2 against Salzburg on Wednesday, Bayern went on to score four goals in the remaining 20 minutes of the second half.

Their attack continues to look unstoppable, with 32-year old Robert Lewandowski firing home goals at a mind-boggling rate. The Polish international already has 10 league goals and a brace in the Champions League and is looking like an early contender for the 2021 Ballon D’Or.

Even with Thiago and Philippe Coutinho departing in the summer, Bayern haven’t missed a beat offensively. The addition of Leroy Sane from Manchester City has been a huge help out wide to add to their already dynamic attack who can expose the best backlines around.

Bayern captured a 1-0 victory in the last Der Klassiker, but Dortmund has won two of their last three meetings on home soil against the Bavarian outfit. These three points could potentially be the difference in the title race, so it will be a very important fixture for both teams.

After being in the title race for most of last season, Lazio slipped up down the stretch and ended up finishing in fourth place. But, they’re still in the Champions League.

It’s been a whole different story for them domestically this term though, currently in 10th place with a 3-1-2 record. They’ve conceded 12 goals already, their worst total in the first six games since the 1992/93 season.

After winning the scoring race last season with 36 goals, Ciro Immobile has netted just three times so far, but he has missed a couple of matches.

On a positive note, Lazio hasn’t lost in their last five competitive matches, including wins over Dortmund, Bologna, and Torino. With a victory this weekend, Simone Inzaghi’s men can move ahead of Juve in the Serie A table. However, they’ve won just two of their last 12 meetings against the reigning champions.

Juve have been slowly adjusting to life under new gaffer Andrea Pirlo, but it looks as things are starting to take shape in Turin.

They’re unbeaten in the league, although three of those six matches have been drawn. The Bianconeri are coming off back-to-back 4-1 victories in UCL and league play against Hungarian outfit Ferenvacarosi and Italian side Spezia Calcio.

Cristiano Ronaldo is finally back in action after missing time due to his COVID-19 diagnosis and has returned with a bang, already scoring two goals and assisting another.

Juventus have had Lazio’s number in the last number of years. They’ve kept 11 clean sheets in 18 matches dating back to the 2011/12 season against them. Lazio did win their last clash with Juve at the Stadio Olimpico in Rome though. Both sides enter Sunday’s clash on a two-match winning streak, so it should be an exciting one to watch.

After winning their first three Serie A matches, Atalanta have hit a spell of poor form, winning just one of their last three league fixtures since.

Lopsided defeats to Napoli and Sampdoria have raised concerns for Gian Piero Gasperini’s side and their Champions League form hasn’t been much better. They’re 1-1-1 in Europe, coming off a 5-0 defeat to Liverpool on Tuesday. It won’t get any easier against a top-notch Inter Milan side.

Blessed with an electric attack consisting of many different contributors such as Duvan Zapata, Papau Gomez, and Luis Muriel, Atalanta haven’t been scoring a whole lot of goals lately. They bagged 13 goals in their first three games and have netted just four times since in Serie A.

However, the defeat to the Premier League giants should be a wake-up call. They still sit in fourth place with a 4-0-2 record in Italy, so a positive result will be crucial on home soil this Sunday. History is not on their side though, having won just one of their last seven outings against Internazionale.

Antonio Conte’s squad has won just once in their last five competitive fixtures as they’re fresh off a 3-2 defeat to Real Madrid in the Champions League.

Romelu Lukaku has missed their last two games and it’s still unknown if he’ll return from a thigh injury in time for Sunday’s clash. Inter have sorely missed his presence up front, as the Belgian already has seven goals to his name this term.

"We did everything we could to win. We have to keep working and switch our focus to Serie A."#Lautaro Martínez after a frustrating night 👇#RealInter pic.twitter.com/MBWVWWRTC4

Currently in sixth spot, the Nerazzurri can move ahead of Atalanta victory this Sunday. Previous matches between these two have been relatively low-scoring, with Inter blanking Atalanta 2-0 in August.

Both sides are coming off disappointing defeats in Europe, so they’ll be hungry to grab a crucial three points in Italy.