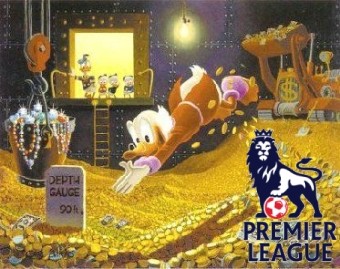 Manchester United have reported an increase in revenues of some 11.6% for the second quarter of the club’s financial year. Despite United declaring that its income had been boosted by strong growth in commercial and broadcasting sales however, fans will not be too impressed by the data as the Reds remain in an unimpressive mid table position and in serious danger of missing out on Champions’ League football for next season. No-one has ever heard a group of fans chant “We’ve got a better balance sheet than you!” and as long as that remains the case, so long as their club remains solvent, the fans that take interest in such financial matter will be few and far between.

The issue highlights the divergent priorities of many people who own football clubs, and those that support them. There are very few exceptions to this, although a couple of notable ones come to mind. It used to be said that the only way to make a small fortune owning a football club, is to start with a big fortune. That may now be less the case however as increasing television revenue rolls in and partnership deals with various commercial enterprises are tied up.

I’m not sure if the words were chosen carefully when United’s executive vice-chairman Ed Woodward declared that: “We once again achieved a record revenue quarter with strong contributions from our commercial and broadcasting businesses despite the current league position, which everyone from the team manager down has acknowledged is disappointing” but perhaps they should have been. From the team manager down is probably true. The question is what do the Glaziers think? If you buy a club to make more money, is it more important to increase the bottom line, or fill the trophy cabinet.

The argument is of course that on occasions the two may be mutually supportive, but that’s not always the case. It’s been widely reported that United will embark on a summer reconstruction of their squad involving a massive layout in new players.

If United fail to hit the magic fourth place finish however, how keen will the club owners to speculate that a large spend this year will recoup an acceptable return on their investment? It’s a question that they well have to address.