Manchester United in hurry to wrap up sixth summer signing

Catalan newspaper Sport have their daily update on Pedro Rodriguez’s transfer to Manchester United. And they have nothing new to add to what we already know.

Amidst report of Ed Woodward to hold meeting with Barcelona officials, Barcelona’s desire to keep him, the player’s family already preparing to leave Spain, and what not, the latest report is Pedro will play the Super Cup against Sevilla on Tuesday. It could be his final match in the Barcelona shirt. 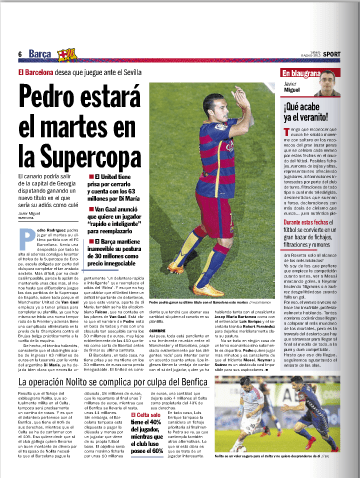 Manchester United are in a hurry to wrap up the deal and will use a chunk of the fund from Angel di Maria’s sale to PSG to facilitate the move. Pedro, an attacking forward, who can play in the all the three positions upfront and has a proven goal scoring record, fits the profile Louis van Gaal is looking for. However, Barcelona are absolutely admant that they will only sell if their €30m asking price is met.

With David de Gea’s situation proving to a major headache for the club, Manchester United do not want to leave transfer dealings late to complicate things for themselves. The club are in a hurry with their season about to start, and thus everything should be decided soon with a meeting between both clubs ready to discuss it.

Pedro is now mentally prepared to leave, and he has already said goodbye to the fans. He is only waiting for United to pay up. Next day, we will be a different update. That’s transfer window for you!