Manchester United will be looking to rebound from last weekend’s 2-1 loss at Swansea City.

Opponents Sunderland are winless in their last three Premier League matches and have won only four of their 26 league matches all season. Two of those have come away from home though.

Louis van Gaal’s side start the weekend one point behind third place Arsenal but only one point above Southampton in a close battle for the UEFA Champions League places. Tottenham in seventh are only three points off fourth.

The bad news for Manchester United this week is that Robin van Persie is set to spend a month on the sidelines after damaging ligaments in his ankle in last weekend’s defeat.

Potential replacement James Wilson is a slight doubt with a dead leg picked up during the week but we’re favouring Wayne Rooney to partner Radamel Falcao up front.

Billy Jones has been out for most of the season and remains sidelined.

Jack Rodwell and Emanuele Giaccherini are missing from midfield through injuries – the latter is out for the remainder of the season. 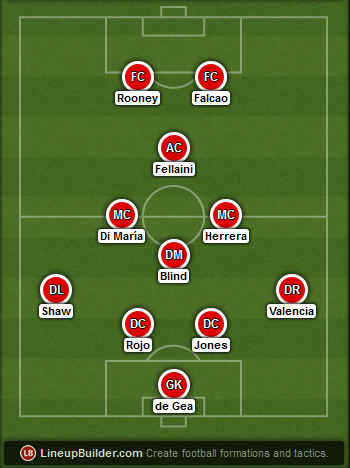 There shouldn’t be any changes to this back five as they’re all fit and Louis van Gaal’s preferred defence of late. Robin van Persie’s injury should see Radamel Falcao returned to the starting lineup. Marouane Fellaini has been used as a target man behind the two strikers of late and could be a useful weapon for flick-ons and bringing his teammates into play versus the Sunderland defence and midfield. 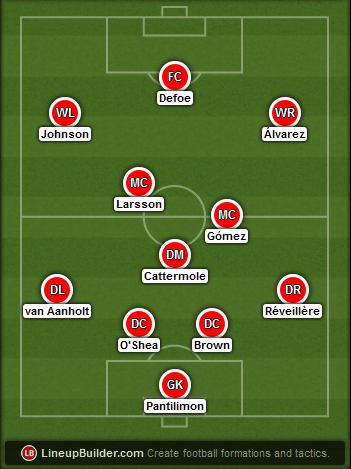 Ex-United duo John O’Shea and Wes Brown remain in the centre of Sunderland’s defence. Patrick van Aanholt is a decent attacking threat down the left. Lee Cattermole sits in front of the back four, with his usual poor disciplinary record. Jermain Defoe is scoring goals since joining in January whilst Adam Johnson is a good threat down the wing. Ricky Álvarez has been playing down the right wing of late but has yet to make much of an impact.

Wayne Rooney vs John O’Shea
With Falcao not performing well of late we think Manchester United will need to look towards Wayne Rooney as their biggest goalscoring threat. The club captain was struggling to score from midfield but van Gaal has lined him back into his usual role as striker of late. Rooney’s movement should see him get a few opportunities in this match versus the ageing Sunderland defence, with the likes of Ángel Di María and Ander Herrera creating chances.

Marouane Fellaini vs Lee Cattermole
Juan Mata scored as the most advanced midfielder when these two drew at the Stadium of Light towards the beginning of the season. While the Spaniard is an option to start this match, Maourane Fellaini has been a good goal threat of late and should be just that versus Sunderland. He has the height advantage over Sunderland’s midfield for sure and is playing well enough to get amongst the goalscorers.

Ander Herrera vs Jordi Gómez
Jordi Gómez doesn’t offer the best protection to the defence and Manchester United should be looking to exploit him with the likes of Ander Herrera and Ángel Di María should he start. Opposition have enjoyed dribbling past Gómez this season as well as drawing fouls from him. The Sunderland midfielder isn’t the best at winning back possession for his side either.

Prediction: Manchester United 2-0 Sunderland
Manchester United have not been playing very well of late but we’re expecting a comfortable win against struggling Sunderland. Gus Poyet’s side have drawn a league-high 13 games this season but will do very well to get anything from Old Trafford. They will offer some threat with Adam Johnson and Jermain Defoe but ultimately we expect them to be camped in their own half for most of the game.