Manchester United put in one of their most-convincing performances of the season when they thrashed Hull City 3-0 on Saturday.

It’s now three successive victories for Louis van Gaal’s side who are in fourth position and narrowed the gap to four points being Southampton.

Stoke City were late losers at Liverpool and head to Old Trafford with only one win in their last five, having lost three during that run. Mark Hughes’ side have kept only one clean sheet in their last 10 Premier League matches.

Ángel Di María was the latest injury for Louis van Gaal to deal with when his record signing went off injured after only 13 minutes at the weekend, with what appeared to be a hamstring injury. There has been no update as of yet.

Injuries in defence have been United’s biggest problems this season. Rafael, Phil Jones and Luke Shaw all missed Saturday’s game. It is not yet known whether either of these will be available on Tuesday.

Daley Blind and Jesse Lingard remain out of contention.

Phil Bardsley could be available again after suffering with a bug last week. Robert Huth has been out all season.

Victor Moses is out until the new year. Peter Odemwingie is out with a knee injury. Both Steve Sidwell and Glenn Whelan are doubtful for this game. 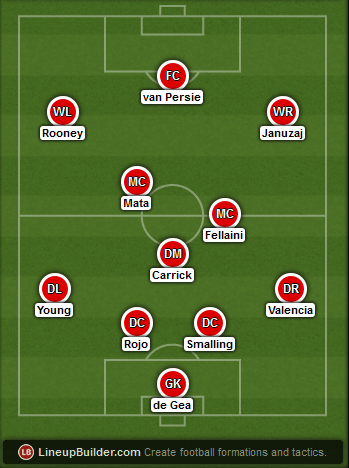 Adnan Januzaj would be the obvious replacement for Ángel Di María to play down the right wing. However, Ander Herrera did replace the injured midfielder after 14 minutes on Saturday. Should none of their defenders recover from injury between now and kickoff then we’ll expect Louis van Gaal to go with the same back four that kept a clean sheet versus Hull City. 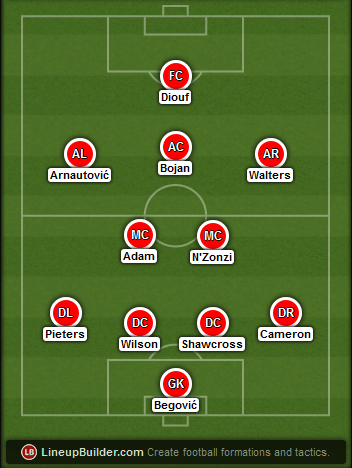 Mark Hughes has potentially lost two holding midfielders through injury, so either Charlie Adam or Stephen Ireland would likely play alongside Steven N’Zonzi. Stoke don’t have enough fit defenders to move Geoff Cameron out of right-back into midfield. Mame Biram Diouf competes with Peter Crouch to start against his former club.

Wayne Rooney vs Geoff Cameron
Manchester United’s captain has found his form in recent weeks and Stoke City could be in for a long evening as a result. Geoff Cameron and co will have their work cut out trying to keep Wayne Rooney quiet. He scored the winner versus Arsenal two games ago and the killer goal versus Hull City at the weekend. Expect United to have most of the possession and Rooney to be a big part of the match.

Robin van Persie vs Marc Wilson
The Dutch international faces competition from a returning Radamel Falcao to start up front. After scoring a stunning strike on Saturday and with Falcao having fitness trouble all season, Robin van Persie can be expected to start. The former Gunner doesn’t see a great deal of action during matches under Louis van Gaal but when he gets a goalscoring opportunity we know how lethal he can be. Marc Wilson and Ryan Shawcross have a busy evening ahead of them in the centre of the Stoke defence.

Jonathan Walters vs Ashley Young
Should Ashley Young and Antonio Valencia start the full-back roles as they did on Saturday, Stoke City have to look down the wings as their opportunity to create chances. Ashley Young is quick to help him get back in position but he really isn’t a defender at all. The hardworking Jonathan Walters should look to cause United a nuisance down their left.

Prediction: Manchester United 2-0 Stoke City
Stoke City are out of form and have had a few injuries through the team. Manchester United have won three in a row and looked very good in doing so at the weekend. Stoke should prove sterner opposition but we don’t see the result being too much different. The Potters should offer more of an attacking threat, but expect United to dominate possession and run out comfortable winners once again.