Manchester United will be out to prove themselves against a Leicester City side that beat them 5-3 back in September.

Both side’s fortunes have changed since then with the Red Devils losing just two of their 17 Premier League games since and the Foxes winning just two.

Louis van Gaal’s side are two points behind Southampton and one point above Arsenal as they sit in the final UEFA Champions League place heading into the weekend’s fixtures.

Louis van Gaal has the majority of his squad available this weekend, almost a full clean of health for the first time during his reign at Old Trafford.

Chris Smalling and Jonny Evans are slight doubts in defence whilst Ashley Young is the only player confirmed out.

The visitors are still without first choice goalkeeper Kasper Schmeichel with a broken metatarsal. Ben Hamer continues between the posts even after the arrival of Mark Schwarzer.

Matthew Upson has been out all season but otherwise Nigel Pearson has the rest of his defence to choose from.

Riyad Mahrez is at the African Cup of Nations with Algeria. Matt James is suspended in midfield.

Chris Wood has an ankle injury that is going to keep him out until late February at the earliest. 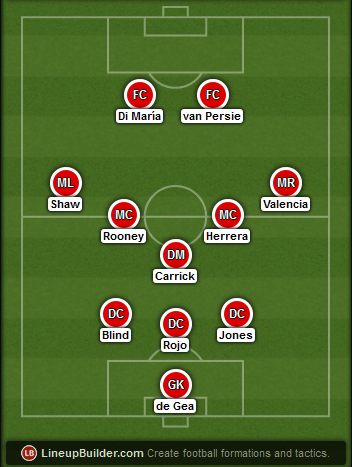 We’re going with Phil Jones, Marcos Rojo and Daley Blind as the back three. Chris Smalling is surely the only defender who could possibly break this up with a fully fit defence to choose from. Blind playing in defence will keep Michael Carrick in the anchor role in midfield. Wayne Rooney to play in centre midfield with Luke Shaw and Antonio Valencia providing the width. There’s a return for Robin van Persie, with Ángel Di María playing a free role. 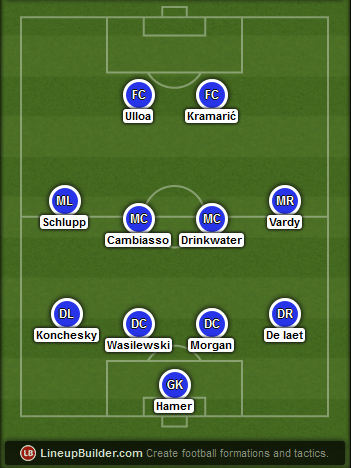 Leicester City’s goals against have come down in the past four league game and only conceded once in their FA Cup victory at Tottenham last weekend. They’ll do well to hold Manchester United to anything less than two though. Record signing Andrej Kramarić should start again in either attack or behind the striker. Defence has to be Nigel Pearson’s priority in this one though regardless of the score at home earlier in the season.

Robin van Persie vs Marcin Wasilewski
Manchester United’s Dutch striker shall be fresh for this game and ready to find the net as his side bombard the Leicester City penalty area. Robin van Persie has scored eight goals in 20 Premier League appearances this season and with the playmakers in this United side he should see plenty of opportunities versus the side propping up the Premier League table.

Wayne Rooney vs Esteban Cambiasso
Without a goal in his last five games in all competitions since his brace against Newcastle on Boxing Day, Wayne Rooney must fancy his chances this weekend. Playing in a midfield role he should see lots of the ball as we expect United to dominate the possession and territory in this game. Leicester’s defence have blocked many a shot this season but it only takes one nasty deflection from a long range effort to beat Ben Hamer. Esteban Cambiasso isn’t so quick these days and we that playing in the home side’s favour with the quick-passing playmakers they have.

Antonio Valencia vs Paul Konchesky
Manchester United’s right wingback has got himself into good space down the wing recently, although he’s final delivery has always been a let down. Antonio Valencia has the beating of Paul Konchesky this weekend, as have most wingers this season. It’s all about composing himself and picking out a teammate to decide whether he produces a match-winning performance for his side.

Prediction: Manchester United 3-0 Leicester City
They were left with humble pie up in the East Midlands back in September and we expect Manchester United to come out all guns blazing and put Leicester to the sword this weekend. Sure, they failed to score versus Cambridge United at the weekend but they’re playing well in the Premier League. Robin van Persie is back and they should have an extra man in midfield this weekend after playing four defenders at Abbey Stadium last weekend.