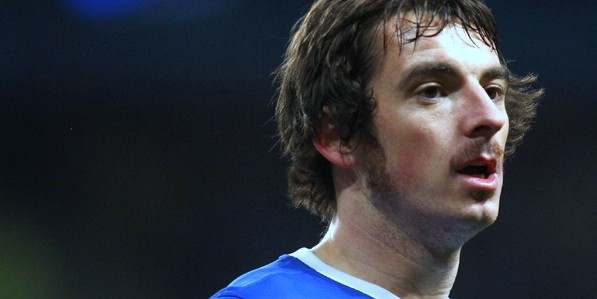 We all knew, predicted, speculated that at some of time this season Manchester United manager David Moyes will definitely try to bring Leighton Baines at the Old Trafford club. And there you go, the Red Devils have lodged an official bid and without any surprise, it has been rebuffed by Everton.

On 26th June, Daily Mail reported that Baines is looking snub interests from Manchester United and he is eager to work with new manager Roberto Martinez.

And within 24 hours, Manchester United have lodged their first of many bids (hopefully) for the 28-year-old. Everton Chairman Bill Kenwright said earlier that the club is under no pressure to sell their top players, except Marouane Fellaini, who has a buy-out clause in his contract, and therefore it was expected that they would immediately reject United’s £12million offer for the left-back.

However, the Guardian understands that a bid in the region of £15million would tempt the Toffees to do business for Baines, who has just two years left on his contract. It is now day light clear that Moyes is looking to bring a solid left-back in the side which places question mark over Frenchman Patrice Evra’s future at the club.

Meanwhile, United have only seven days left to activate the release clause of Barcelona starlet Thiago Alcantara. The talks are going on at an advanced level, while Daily Mail reports that Premier League champions have already agreed personal terms of £5.5million a year with the 22-year-old.

Moving on to other stories, United have opened talks with the highly rated Sevilla youngster Geoffrey Kondogbia, who is also a target of Chelsea, reports The Metro.

The La Liga club values the midfielder at £15million, though United are confident of getting him at a much lower price, around £8million, and would be willing to loan the 20-year-old back to Sevilla for the entire 2013/14 campaign.

United youngster Nick Powell may be on his way out, albeit temporarily, on a loan move, with Doncaster Rovers could be his possible destination.