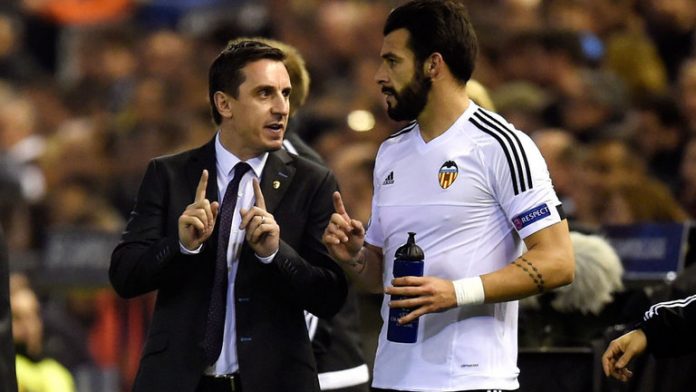 Manchester United scouts were present on the stands in Benfica’s 1-0 win against Vitoria Guimaraes, with an intention to keep an eye on Goncalo Guedes, who is dubbed as “the new Ronaldo”.

Guedes wasn’t used in the match, as Rui Vitória, the Benfica manager, left him on the bench instead.

The trip didn’t go wasteful, as Benfica starlet Renato Sanches, who scored the only goal against Guimaraes, reportedly caught the attentions of United scouts.

In their transfer blog, ESPN have cited a report from Portugal, where they claim the central midfielder could be set to join Louis van Gaal’s outfit in January.

Valencia manager Gary Neville has ruled out the possibility of becoming head coach of Manchester United and England in future.

In an exclusive interview with Sky Sports’ Geoff Shreeves, he said:

I’m not going to say where I want to end up, and it isn’t in management or head coaching, so I want to be clear about that.

That’s not my ultimate goal of where I want to be. From my point of view, I was really enjoying what I was doing, I really was, the multiple things I had on, even though I knew it was coming to a point where I had to make decisions at the end of this season.

Neville is currently in charge of Valencia until the end of the season has been, and has been touted as a future candidate to become the manager of Manchester United or England national team, but it seems, the former United player is not looking to pursue management as a long-term career.