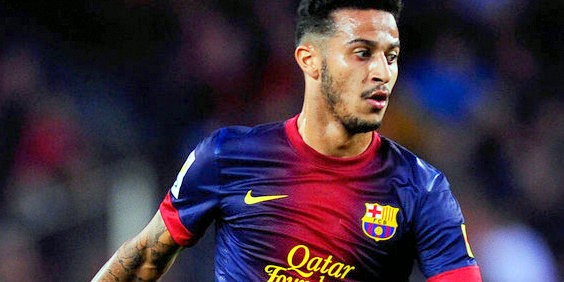 According to Spanish newspaper Marca, the report from Spanish radio station Cadena COPE claims that the 22-year-old will sign for Bayern and the deal will be announced within Thursday.

It is understood that the youngster was convinced to join the Bavarians, following a phone conversation with his former manager, Pep Guardiola, where he convinced the Barcelona midfielder of his plans of dropping midfielder Javi Martinez (who often played as a central defender for Athletic Bilbao under Marcelo Bielsa) at centre-back in order to accommodate a place for Thiago.

In a recent press conference, Guardiola told reporters about his desire to land Thiago, as reported by journalist Rafael Honigstein through his Twitter account.

“I want Thiago Alcantara. I have asked (Bayern to get him). I don’t know what will happen,” the former Barcelona manager said.

“I know him very well. I talked to Karl-Heinz Rummenigge (Bayern chairman) and Matthias Sammer (the club’s sporting director) about him; we will wait and then see.

“Thiago is the only player I want, that’s what I told them. It will be him or no one. We have many players but we need the special quality that Thiago Alcantara brings.”

Bayern have a constellation of star-studded midfielder in their ranks such as Schweinsteiger, Kroos, Luis Gustavo, Gotze, Shaqiri. Further, there are two promising youngsters coming up in Hojbjerg and Emre Can, both of whom are tipped to have bright futures at the club and Guardiola will have herculean task to integrate them more into the first team.

The path won’t be easy for Thiago, who is looking to find a club, where he can play regular football, in order to show Spain manager Vicente del Bosque that he deserves a place on the World Cup squad.

Manchester United were heavily interested in signing the player as the Red Devils looked to activate his release clause of £16 million.

Such comments from Guardiola will serve a devastating blow to Manchester United as the Red Devils identified him as a long-term solution to their midfield problems.