Portugal newspaper O Jogo (newspaper version) has another update today on Argentina winger Nicolas Gaitan and the transfer mess going on around him.

The 27-year-old versatile forward has been called up to the Argentina squad for the upcoming friendlies, but it’s his transfer move away from Benfica that remains a major headache for his agent, Jorge Mendes.

According to reports in Portugal, Mendes wants to solve Gaitan’s future at the earliest, and he is planning to take the Argentine to any big European club before the transfer deadline day. 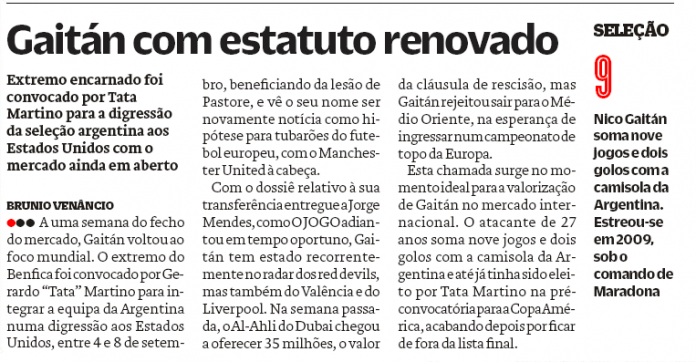 Premier League club Manchester United have been heavily linked with a move for Gaitan, but the Red Devils have targets of their own as well.

Spanish giants Valencia have also reportedly shown an interest in signing him, but whether Los Che would be willing to pay €30m for his signature remains to be seen.

In recent weeks, clubs from Middle East have shown an interest in Gaitan. He has received a lucrative wage package offer from a Dubai based club, Al-Ahli. Gaitan believes, however, he is good enough to represent any big European club, and therefore has rejected the chances of moving to Dubai.

Manchester United are in the market to add a world class forward in their ranks, having sold Robin van Persie and Angel di Maria in the summer.

The Red Devils has suffered a huge transfer blow last week, after missing out on Barcelona forward Pedro Rodriguez, who joined Chelsea instead.

If the reports are to be believed, Manchester United are showing a keen interest in Wolfsburg’s highly rated attacking midfielder Kevin de Bruyne. Also, reports in Brazil suggest that the Red Devils have submitted a world-record-bid for Barcelona’s world class forward Neymar.

It’s difficult to comment on the veracity of the reports, but one can fairly guess the club is targeting high profile names like Muller, De Bruyne and Neymar. It is highly unlikely that United will make any formal move for Gaitan this summer.