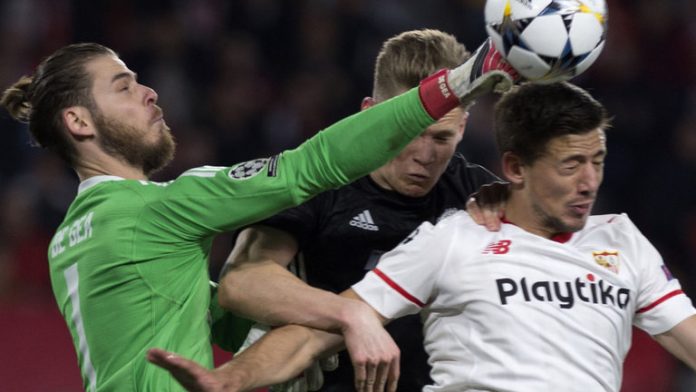 Manchester United host Sevilla in the Champions League on Wednesday aiming to reach the quarter-finals of the competition for the first time since 2014.

The Red Devils secured a 0-0 draw in the first leg in Spain and they are strongly fancied to progress to the last eight of the competition.

The lack of an away goal means Jose Mourinho’s side will need to avoid any defensive lapses, but recent league victories over Chelsea and Liverpool highlight United’s form at the moment.

Paul Pogba remains doubtful after he failed a late fitness test ahead of the Liverpool clash.

Marouane Fellaini appears to be coming back to full match fitness and he could replace Scott McTominay in the starting XI.

Ander Herrera, Marcos Rojo, Phil Jones and Daley Blind remain on the sidelines, while Anthony Martial could miss his third match in a row.

Sevilla have already confirmed that Jesus Navas will not be travelling to Manchester due to injury. Gabriel Mercado is expected to fill in at right-back, allowing Simon Kjaer to play at centre-half.

Mourinho kept things tight in Spain and although David De Gea had to make one spectacular save to keep out a Luis Muriel header the Premier League side deserved their draw.

Romelu Lukaku had a goal disallowed late in the game for handball and if your first sports bet is on this game the Belgian striker is a decent wager at 10/3 to score first.

Marcus Rashford showed his quality against Liverpool on Saturday with a pair of goals and he could be worth an interest at 7/4 to score at any time during the match.

United won all three home games in the group stage by an aggregate score of 7-1 and they were unbeaten at Old Trafford during last season’s successful Europa League campaign.

They are priced at 20/1 to win the Champions League and that looks tempting given Mourinho’s ability to make his teams hard to beat.

Sevilla head into the game on the back of a disappointing 2-0 home defeat against Valencia in La Liga on Saturday, but it would be foolish to underestimate them at Old Trafford.

The Spaniards will take heart from a 2-2 draw against Liverpool at Anfield in the group stage and they can be backed at 13/8 to qualify for the next round.

However, they were beaten 2-0 at Leicester City at the same stage in last season’s competition and United can be backed at 6/1 to match that scoreline on Wednesday.

With home advantage United should prove too strong for Sevilla and they look a good bet at 7/5 to win to nil against the Spanish side.