Manchester United have re-started negotiations with Portugal club Benfica over the signing of their highly rated winger, Nicolas Gaitan.

The Argentine winger, capable of playing in all three positions up front, has been on United’s radar for quite sometime now. He has been heavily linked with a move to Manchester United, with his agent claiming publicly that they have had a pending negotiation with the Old Trafford club.

Gaitan has a reported release clause of €35m but United are planning to buy him for €30m and adding one or two unwanted players that might interest Benfica. Brazilian defender Rafael and Mexican striker Javier Hernandez are thought to be the players who was not in Louis van Gaal’s plan and could be included as a part of the deal to lure Gaitan from Benfica.

Spanish club Atletico Madrid had also shown an interest in Gaitan. The Rojiblancos were keen to add him to their star studded squad, as a replacement for Arda Turan, who joined Barcelona, but their offer didn’t quite please Benfica to enter into any sort of negotiation. 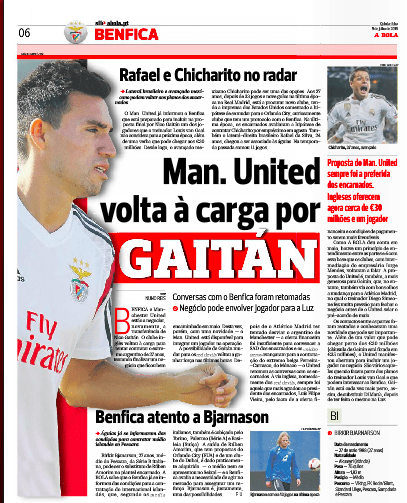 Portugal media keeps on feeding us this info that Manchester United have had a verbal agreement to sign Gaitan, but the Red Devils would only make a move for the Argentine, should Angel di Maria leaves the club.

Portugal newspaper O Jogo has also covered a piece on Gaitan’s transfer saga where they claim United haven’t thrown in the towel yet but they’re waiting for closure on the Di Maria situation.