Angel di Maria, like Neymar could miss the rest of the World Cup for Argentina through injury. The sensational world class winger however faces an uncertain future at Real Madrid and could move elsewhere in the summer.

Several Spanish media outlets are reporting that Real Madrid are keen to sign Colombia’s sensational attacking midfielder James Rodriguez, who impressed heavily during the World Cup, and could sell Di Maria to recoup the money. 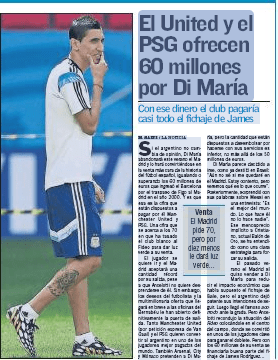 Di Maria who has a contract till 2018, himself is unsure of his future and said recently: “I don’t know if I’ll stay at Real Madrid, we’ll see what happens.”

Spanish newspaper AS claims that the player, who played a crucial role for Madrid in winning the La Decima last season, is plotting an exit strategy to leave the Bernabeu. Another Spanish newspaper, El Confidencial reported last week that that Jorge Mendes, agent of Di Maria is planning to take the Argentine to Manchester United.

Spanish newspaper Marca reported recently that apart from Manchester United, Premier League giants Arsenal are also in the race to sign him, but it is highly unlikely Arsene Wenger will pay such hefty transfer fee for one single player.

Now, AS reports today that Manchester United and PSG are “willing to pay” €60m to land the Argentine. Di Maria is world class no doubt, but will United actually pay such transfer amount for one single player?

United broke their transfer record fee last January when they signed Juan Mata from Chelsea and should they sign Di Maria for around €60m, they will break their club transfer record yet again.