German newspaper Bild have covered a transfer rumour today where they report Premier League giants Manchester United are plotting a sensational move for Schalke 04 defender Benedikt Höwedes. They have relayed the information from Goal.com, and explain in the article why the 26-year-old defender would be ideal for the Red Devils.

In that article from Bild, they have also added a small piece of information that caught our attention this morning. It says that Manchester United are also seemingly interested in Schalke’s attacking midfielder Julian Draxler who you all know have been repeatedly linked in the last couple of years with both Arsenal and Chelsea.

The 21-year-old is arguably one of the best attacking midfielders in the world. In terms of sheer talent, he is probably better than Liverpool’s Raheem Sterling, however, injuries and a loss of form meant no big Premier League clubs were ready to take a gamble on him this summer.

This season he has scored two goals so far, though his performances has been much better than last season, averaging 7.14 as per whoscored.com. He was outstanding against Chelsea at Stamford Bridge in the Champions League, while gave his best performance in Schalke’s 2-0 win over Hertha Berlin. 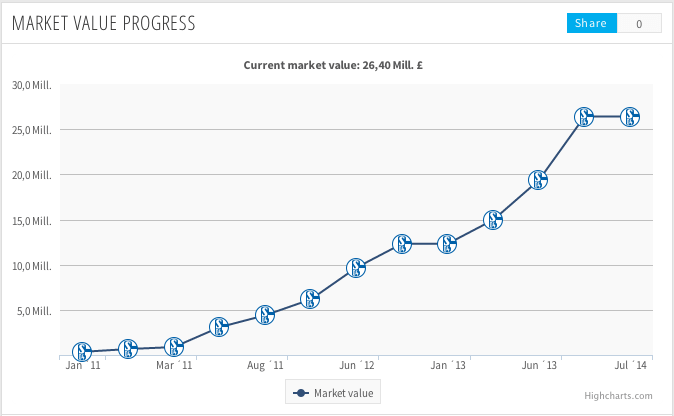 The report says Manchester United scouts have been regularly visiting the Veltins-Arena to keep an eye on both Höwedes and Draxler.

Draxler can play on all the three positions upfront and could be used as an orthodox winger. He could be an ideal replacement of Juan Mata, should United decide to cash in on the Spaniard next summer.