It seems like Sir Alex Ferguson has himself taken the responsibility to start the rebuilding works at Old Trafford from behind. The legendary Manchester United manager was spotted in Turin, watching Europa League final between Sevilla and Benfica, last night.

During the match, images circulated all over the social media that Ferguson was having a chat with Juventus manager Antonio Conte.

Italian media station Sportmediaset reports that Manchester United have made the first formal move for Chilean midfielder Arturo Vidal, who is also a reported target of Barcelona and Real Madrid. 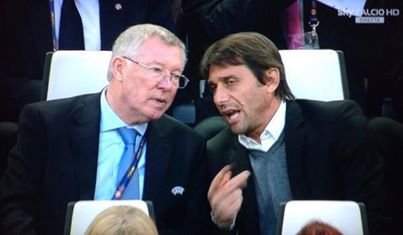 The 26-year-old is arguably the one of the best midfielders in the world in his position and role and will be a top signing for any European team. Manchester United are in dire need of a world class central midfielder this summer and have targeted Vidal to fill that role.

According to the report, United have offered something in the region of €30m-32m for the Chilean, which is still €8m short of Juventus’ valuation.

The Old Lady would be willing to sell Vidal, if the asking price is met, as it would help them to hold on to Paul Pogba. With so many top European clubs vying for his signature, Manchester United will have to meet the valuation price (and even then it could still get complicated) to have any chance of luring Vidal away from Italy.