Portuguese newspaper, A Bola have claimed this morning that Manchester are extremely close to landing Benfica winger, Nicolas Gaitan.

The paper claims that Manchester United have been in talks with the Portuguese outfit and have reached an agreement. The transfer is likely to go through after the Taca da Liga final. 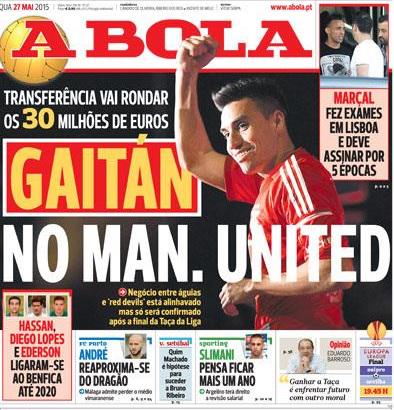 The Argentine winger has been linked heavily with Chelsea earlier but the Portuguese daily seem confident that United have wrapped up the deal.

Gaitan has been in sensational form for Benfica this season and will be a tremendous addition to Van Gaal’s attack. The Old Trafford outfit have missed a threat from out wide this season and the likes of Depay and Gaitan will be ideal solutions to their problems.

The signing of Gaitan casts further doubt on the future of Angel Di Maria, who has been linked with a move to PSG. The Argentine has failed to impress in his debut season and is thought to be keen on joining the French champions this summer.

A Bola state that the fee will be in the region of 30 million euros and the Argentine winger is set to join Memphis Depay at Old Trafford, as their second big signing this summer.

The paper also claim that there are a few steps left to complete the transfer, but it is expected to go through eventually.

It is important to consider that this is in no way a done deal, but A Bola are certain Gaitan will be a Manchester United player come August.